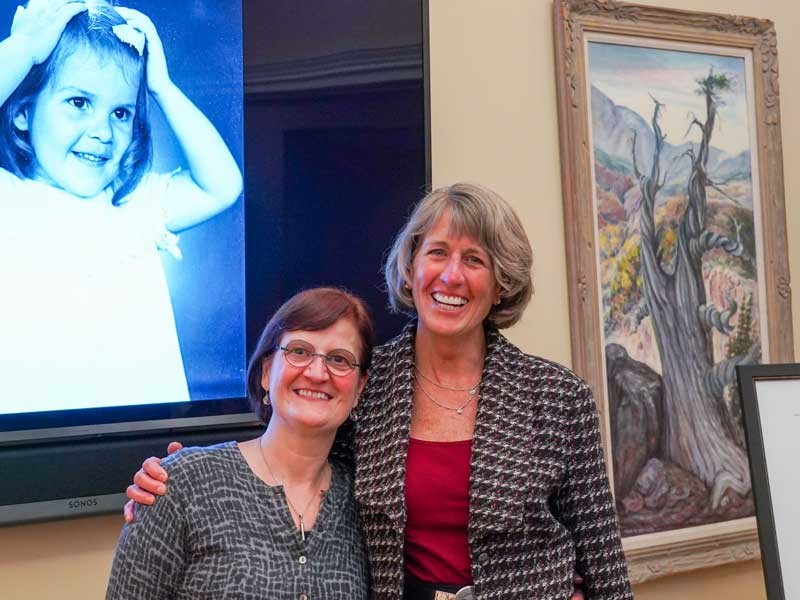 Professor Caroline Lavoie and USU President Noelle Cockett at Lavoie's recent Inaugural Lecture celebrating her journey to full professor, including her childhood in Canada represented by a photo of her at age 3.

Biographies usually have chapters, but if you are a Quebec-born artist you might call them tableaus, “Living scenes that depict important moments of my life,” said Caroline Lavoie at her Oct. 29 Inaugural Professor Lecture. Lavoie recently was promoted to full professor in the Department of Landscape Architecture and Environmental Planning (LAEP).

“She is the person in the department I most think of as being able to bring together the art and the science and the urban and rural,” said Sean Michael, LAEP department head. “She’s a visual thinker who investigates ideas in urban cultural landscapes, landscape theory, design and representation. She is interested in how to reconnect people with the landscapes they inhabit. Drawing is essential to her process of communication.”

Lavoie’s presentation chronicled her life in four tableaus, the first being Jonquiére, a small town in Quebec, where she was born in 1964. “We did not have a car and my mom made all of her own clothes. No one spoke languages other than French when I was growing up and very few do even now,” she said.

Each tableau in the presentation was separated by a black and white photo of her three-year-old self with both hands on her head seemingly thinking, “What do I do now?” The first what-do-I-do moment was at the end of her teenage years which included working at a local funeral home from age 14 to 19.

Tableau 2 was moving to Montreal to attend college, but not yet majoring in landscape architecture.

“After studying political science along with humanities toward a degree, I took a one-year transitional break,” Lavoie said. “For one year I was a pastry maker crafting 300 croissants a day.”

Though she recalls this phase fondly, she knew it was just a detour. Lavoie started studying landscape architecture in 1984 and graduated in 1989. She remained in Montreal working for firms on urban design and public open space projects. In 1992 she decided to continue her studies by pursuing a master’s degree in urban design and landscape at the University of Southern California (USC). At that point she spoke only French and headed to the United States with just a two-week intensive conversational English course as preparation.

Tableau 3 encompassed her time in Southern California, which included a year in San Louis Obispo and two years living in a convent near the USC campus. There she worked on urban designs to help connect fast- growing communities separated by highways and the racial tensions of that time. “This work in Los Angeles influenced my studio projects from 1992 until today in SLC and other fast-growing cities with massive freeway systems,” she said.

Tableau 4 involved graduating, turning 30, buying her first car, learning to drive and moving to Utah, she explained. She also learned to bowl, horseback ride, ice skate, cross country ski, fly fish, swim and speak Spanish. While she has lived in Logan and worked for the LAEP department for 25 years, she has done extensive international travel as part of her sabbaticals and while leading student tours.

Lavoie was the first woman to receive tenure in the department and the first promoted to full professor. Her sketches of western landscapes have been featured in numerous U.S. galleries’ exhibits.

During her current sabbatical Levoie said she will be exploring and sketching the landscapes surrounding U.S. Highway 89 from Canada to Mexico.

Will there be a Tableau 5? It’s a work in progress. 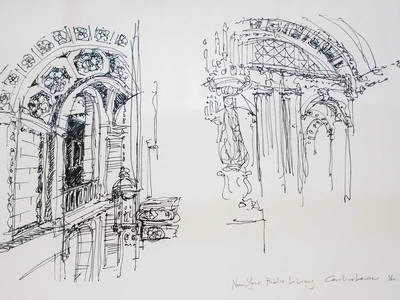 Drawing is an important aspect of Lavoie's creative process as a landscape architect. Her drawings, such as these of the New York Public Library, have been exhibited in a number of galleries and museums. 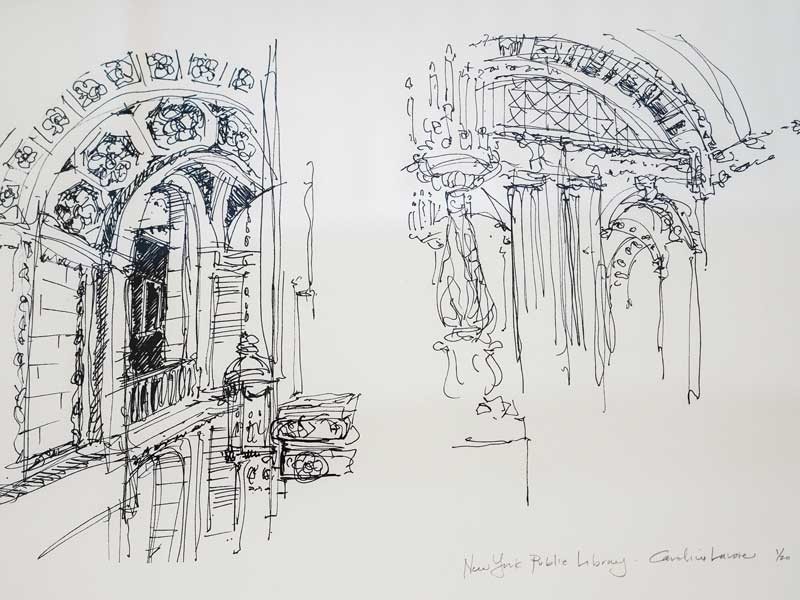