The Old Lyric Repertory Company continues its 2010 theater season with an intriguing mystery, Agatha Christie’s The Mousetrap.
The production opens Wednesday, July 7, at the Caine Lyric Theatre in downtown Logan, 28. W. Center Street. Curtain time is 7:30 p.m.
The Old Lyric Repertory Company is a production program based in the Theatre Arts Department in the newly named Caine College of the Arts at Utah State University.
Tickets for the production and all OLRC plays are available by calling or visiting the Caine College of the Arts Box Office in the Chase Fine Arts Center, FA 139-B, on the USU campus, or call 435-797-8022, or at the Caine Lyric Theatre Ticket Office, open from 1-8 p.m., Monday-Saturday. Tickets can also be purchased online at the CCA Box Office website.
Agatha Christie’s The Mousetrap is the longest running play in England, in continuous production since it premiered in 1952.
Director for the OLRC production of The Mousetrap is Terrence Goodman who brings 40-years experience in Broadway and film credits. He promises that audience members will get their money’s worth out of the classic whodunit.
“If audiences like games like Clue or a good thriller, a good mystery and a whole lot of fun, you can bring the whole family to … well, let’s just say if you see one show this year, it should be The Mousetrap,” Goodman said.
The action in the play, set in the early 1940s, takes place when the guests at the new Monkswell Manor Hotel are snowed in during a blizzard. While staying in a young couple’s bed and breakfast, a varied group of cabin-fevered customers must race to find the killer among them before he or she can strike again.
Richie Call, an OLRC alum, plays his dream role, Detective Sgt. Trotter, the man trying to solve the mystery of a woman strangled to death in London, and prevent another murder at Monkswell Manor.
“I think it’s one of the most successful plays of its genre at keeping the audience wondering who the murderer is through the whole show,” Call said. “Absolutely every character in the play is a suspect.”
The characters include a haughty court magistrate, crazy architect, mysterious world traveler, middle-aged Major, elderly foreigner and the newly married couple.
The Mousetrap has all the makings of a good mystery and the audience will never guess the surprise twist ending, Goodman said.
“The show doesn’t give the answer to world peace, but you come out after, very excited and very entertained,” he said.
Goodman invites everyone to join the cast of characters, bizarre and intriguing as only Agatha Christie can write them, for the quintessential murder mystery that has inspired dozens of imitations and parodies.
Following its opening July 7, The Mousetrap continues July 8-9. Additional performances are July 17, 20, 27 and 31. Performances begin at 7:30 p.m. nightly with additional 2 p.m. matinees July 17 and July 31. The play joins three others in the OLRC rotation, The Complete Works of Williams Shakespeare (Abridged), Blithe Spirit and Always…Patsy Cline.
For more information on the OLRC’s 2010 season, visit its website.
Related links:
Writer: Amanda Running, Caine School of the Arts, 801-227-4442, amanda.running@aggiemail.usu.edu
Contact: Sally Stocker Okelberry, 435-797-1500, sally.okelberry@usu.edu 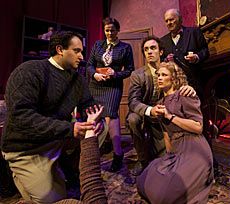