Three students took top honors at the 2007 Leonard J. Arrington Writing Awards offered at Utah State University in conjunction with the annual Arrington Mormon History Lecture.
Christopher James Blythe received the $1,000 first-place prize. The $500 second-place award went to Andrew Armstrong and Jami J. Van Huss received the $250 third-place prize.
The awards were presented during the Friends of the Merrill-Cazier Library spring lecture March 27. The essays were submitted to the competition following the fall Arrington lecture that featured William A. “Bert” Wilson. The writing awards are provided by the Leonard J. Arrington Foundation.
“We felt like the overall caliber of the essays this year improved in both numbers of entrants and in quality,” said Brad Cole, associate director for Special Collections and Archives in the Merrill-Cazier Library and ex-officio member of the Leonard J. Arrington Foundation board. “We are excited and pleased that the winner is a student in Utah State’s Religious Studies program.”
The second-place winner, Armstrong, said the essay project forced him to read and learn more about folklore in order to craft his essay. The third-place recipient is an editorial assistant for the Western Historical Quarterly, also based at USU.
“These are all top-notch young scholars, and we are extremely pleased that we are able to help them with their college education,” Cole said.
Blythe earned a bacheor’s degree in anthropology from Texas A&M University, then served a mission for his church. In September 2007 he began work on a second bachelor’s degree when he enrolled in USU’s Religious Studies Program. He is president of the Religious Studies Club at USU and hopes to begin the master’s program in history at USU next semester.
Armstrong is enrolled in a doctoral program in psychology at USU. Upon completion, he hopes to work in private practice with children and families. His wife is also pursuing a doctorate at USU in sociology. They are the parents of two boys.
Van Huss is a sixth generation Cache Valley resident and said she grew up with a great love of history. She graduated from Mountain Crest High School then earned a bachelor’s degree at the University of Utah. While in Salt Lake, she interned at the Utah State Historical Society and worked for the 2002 Winter Olympic Games. She is pursuing a master’s degree in history at USU. She and her husband, Jonathan, are the parents of a daughter.
The annual Arrington Mormon History Lecture is hosted by Special Collections and Archives in USU’s Merrill-Cazier Library and is held each fall.
Contact: Brad Cole (435) 797-8268 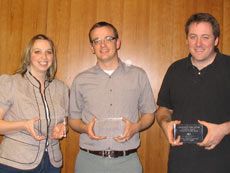