The 2010 Old Lyric Repertory Company stage production Always…Patsy Cline comes alive for one final performance with the original cast at the Caine Lyric Theatre (28 W. Center Street, Logan) Friday, Sept. 17, at 7:30 p.m.
“This show sold more tickets during the OLRC 2010 season than any of the other productions,” said Kris Bushman, OLRC stage manager. “We are expecting a full house on September 17.”
Always…Patsy Cline opened June 30 at the Caine Lyric Theatre as the hilarious, heartfelt musical for the OLRC 2010 theater season.
The Old Lyric Repertory Company is a production program based in the Theatre Arts Department in the Caine College of the Arts at Utah State University. It is an advanced performance program that assembles a company of actors, directors, designers and technical staff from around the country.
“We are excited for the entire cast and orchestra to reunite for this one night,” Bushman said.
The returning cast members include Erica Hansen as Patsy, and Colleen Baum as Louise.
Tickets are available by calling or visiting the Caine College of the Arts Box Office in the Chase Fine Arts Center on the USU campus (Room 139-B), 435-797-8022. Tickets can also be purchased online at the CCA Box Office website. Tickets can be purchased at the theatre’s box office prior to the performance. Adult ticket prices range from $19-$25, with discounts for USU students, faculty/staff and senior citizens.
Rich with warmth, heart and passion, the musical Always…Patsy Cline relives the career of this beloved American country music singer as seen through the eyes of her biggest fan, Houston housewife Louise Seger. The OLRC production is directed by Adrianne Moore, a faculty member in USU’s theatre arts department.
“Always…Patsy Cline is an incredibly popular show, so popular in fact, it is one of the most produced musicals in America and has developed an almost cult-like following,” said Moore. “It’s a stompin,’ hollerin’ good time — it’s very full-on entertainment. People are going to be clapping and hollering to the fabulous music interspersed with extremely funny and, at times, moving monologues.”
The style of Always…Patsy Cline alternates between Seger’s hilarious monologues characterized by her strong Texas persona, and Cline’s miraculous vocal ability, giving the show an extraordinarily intimate connection between the two characters and audience, Moore said.
Mike Christiansen, noted musician, recording artist and professor of guitar at USU, was musical director for the OLRC summer production and again for the revival.
Presenters encourage USU students who didn’t have the opportunity to attend the production during the summer season to attend the one-night-only revival.
Related links:
Writer: Courtney Lewis, Caine College of the Arts, 435-797-9203, Courtney.lewis@usu.edu
Contact: Dennis Hassan, dennis.hassan@usu.edu 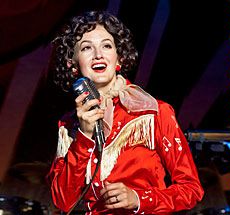 Erica Hansen from the OLRC production of "Always…Patsy Cline." The production is revived for one performance only Friday, Sept. 17, 7:30 p.m., Caine Lyric Theatre, 28 W. Center, Logan.