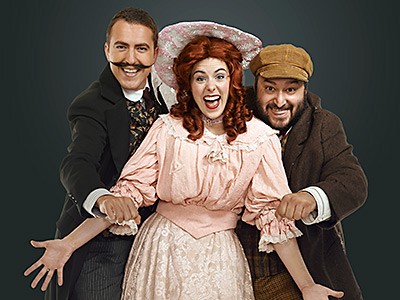 The wildly theatrical musical The Mystery of Edwin Drood opens at the Caine Lyric Theatre in Logan June 24, the third production in the summer lineup of four offerings by the Lyric Repertory Company and Utah State University.

In this musical-within-a-musical, a second-rate company of players in Victorian England presents its flamboyant rendition of the famous and unfinished Charles Dickens novel. The Mystery of Edwin Drood is the final novel by Dickens, which was unfinished at the time of his death. The ending of the book is unknown. Though the novel is named after Edwin Drood, the plot focuses on Drood’s uncle, John Jasper, a choirmaster who is in love with his pupil, Rosa Bud, who also happens to be engaged to Drood. The play is set in 1892 in The Music Hall Royale.

“The musical-within-a-musical hasn’t been harder to prepare for, necessarily, but it is double the work,” said Lacy J. Dunn a member of Actors’ Equity Association who plays Deirdre Peregrine and Rosa Bud in “Drood.” “I need to know Rosa’s story in the Charles Dickens’ tale and Deirdre’s story in the musical hall. I’ve gotten to know both character’s lives and tracks extremely well due to the quick shifts back and forth between who I’m playing at a given time.”

One of this production’s most talked about features is the unusual finale where audience members will vote upon what happens in the ending.

“Between the wonderful direction of Ken Risch and the talented actors prepared to play any number of outcomes, rehearsals have always had an ‘on-the-edge-of-your-seat’ feeling,” Dunn said. “Every show will be completely different and I’m very excited to see how it all unfolds.”

“This is thrilling for the actors because each character reacts differently to each combination chosen based on their pre-established relationships,” Surace said. “It is a lot of fun because we are not only reacting as our characters, but also as the ‘actors’ whom we play. There is never a dull moment, because during the performances we will be learning who the detective, murderer and lovers are at the same time the audience does. We have to be ready for anything and everything at a moment’s notice.”

Since the audience chooses the ending and there are so many possible combinations, the Lyric Rep has a special ticket offer for those who would like to see the production twice. Anyone who has purchased a ticket to a performance can bring the stub to the box office at any time to purchase a second ticket to “Drood” for any spot in the theater for $15.

Opening June 24, The Mystery of Edwin Drood plays June 25-26, followed by Last Train to Nibroc June 27. It then runs on selected dates through Aug. 1.

Also part of the Lyric Rep 2015 season are Noises Off and And Then There Were None, which opens Wednesday, July 1.

For more information and tickets, visit the Caine College of the Arts Box Office located in room L-101 of the Chase Fine Arts Center on USU’s Logan campus, call 435-797-8022 or see the Lyric Rep’s website. The box office is open from 9 a.m.-noon Monday through Friday. Tickets can also be purchased at the Caine Lyric Theatre in downtown Logan at 28 West Center Monday through Friday 1-4 p.m. and one hour prior to curtain on performance dates.