Whether it’s flying over a wall like Iron Man in the latest Avenger’s movie or swinging from building to building with ease like Spiderman through Manhattan’s skyline, military forces have long looked for ways to emulate these superheroes.

A group of Utah State University mechanical and aerospace engineering students pulled out their best superhero tricks, using engineering principals, some basic math and a lot of ingenuity, to design a system for special operations force personnel to scale buildings or mountain faces under a variety of conditions. The students’ efforts were part of the Air Force Research Laboratory’s Design Challenge. The design was a success that garnered the group first place in the national competition.

Using three components — a vacuum ascender, an adhesive anchor and a rope ascender ­— the Utah State University team took its design to the National Center for Medical Readiness training facility in April to compete against 16 universities that included Arizona State, Johns Hopkins and Brigham Young University for the top honor.

In August 2011 teams were given the warfighter-focused engineering design challenge, $20,000 for materials and fabrication and nine months to come up with a demonstrable solution. Teams were judged on both objective measures (weight, size, velocity achieved) and subjective measures (ease of operation, usability, stealth, innovation and elegance).

The team ended up with a design that allows a person to put their hands and feet into a spider like vacuum contraption allowing them to climb a wall. After reaching the top of the wall, the climber then places adhesive anchors on the top of the structure before sending down a rope strong enough to hold 300 pounds with which the other team members are able to ascend the wall.

“We went into this competition not knowing what the requirements were going to be,” said TJ Morton, mechanical and aerospace engineering student and team captain. “The competition allowed us to use everything we had learned about in our engineering courses and apply it to a genuine design problem.”

During the course of the school year, the team went through several trial and error ideas before coming up with the one that worked.

“I really liked this challenge because it was hard,” said mechanical aerospace engineering professor and team mentor Steve Hansen. “Coming up with a viable and practical solution really challenged the students.”

During the competition, the teams briefed judges, safety officers and pararescue jumpers from the 123rd Special Tactics Squadron Air National Guard Unit in Louisville and from Air Force Special Operations Command (Hurlburt Field) on their process and final design. They were quizzed and congratulated, then grilled by the pararescue jumpers who were charged with physically testing the teams’ systems on the 90-foot high, sheer concrete face of an abandoned cement silo.

The Utah State University team was the only team to get all four military personnel to the top of the 90-foot wall.

“The logistics of this project became real very quick,” said team member Dan Aguirre. “Someone was actually relying on our design to climb a wall. You can’t get that in a textbook.”

“AFRL gets the benefit of some very creative ideas that address a real military need, while the students get an opportunity to work under real-world conditions,” he said. “They gain experience in rapid prototyping and engineering a solution to a customer need, knowing that their design could truly make a difference.”

USU’s Mechanical and Aerospace Engineering Department Head Byard Wood liked the competition because it was a fresh project and there wasn’t a heritage or history on which the student’s could base their ideas. All we knew was that we had to climb a wall, he said.

“It was fun to work on our design and then come up with a unique solution,” said team member Keith Bates. “I’ve showed potential employers what I’ve been working on and they are in disbelief.”

Team member Garrett Vaughan said the team’s creation, and the win, is a great resume builder and that he will take what he has learned and apply it in his future engineering work.

“This is great for the USU mechanical and aerospace engineering department and really shows the caliber of our program, our teaching and our research,” Hansen said.

Under close supervision of Hansen and Wood, the hard work for the team paid off and it looks forward to passing the torch onto the next USU team that will compete. USU is slated to go the competition for the next two years.

“Understanding and learning to deal with ambiguity is a wonderful life lesson,” said USU College of Engineering Dean Scott Hinton. “In spite of all the ambiguity in the competition, the students’ kept going, thinking on their feet, adapting and doing what needed to be done. Learning how to win comes from detail, working hard as a team and with an attitude that you are going to win. I am so proud of these students.”

Team member Steven Daniels echoed Dean Hinton’s sentiment when he said the team had a lot of confidence going into the competition. That played a big part in their win, he said.

Now the team will go on to try and secure a $100,000 grant to further develop its innovative idea for the Air Force.

And while Iron Man and Spiderman may be comic book superheroes with incredible abilities only seen on the silver screen, this group of Utah State University engineering students might be on the right track to making some of those abilities closer to reality. 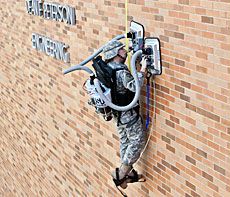 A USU ROTC student nears the top of the Engineering Building during a climbing demonstration. 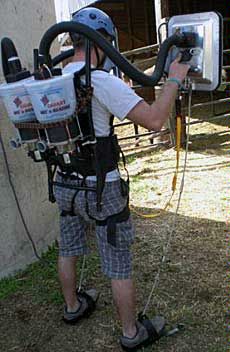 Suction cups at the ready … a test climb in Utah. 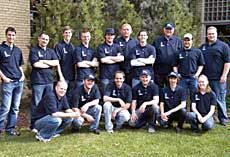