The Old Lyric Repertory Company debuts the British comedy “Blithe Spirit” Wednesday, June 16, at the Caine Lyric Theatre. The second of four summer productions presented by the company, “Blithe Spirit” with a 7:30 p.m. curtain time.
The Old Lyric Repertory Company is a production program based in the Theatre Arts Department in the Caine School of the Arts, soon to be the Caine College of the Arts, at Utah State University.
The Caine Lyric Theatre is located in historic downtown Logan at 28 W. Center St.  Tickets for the production and all OLRC plays are available by calling or visiting the Caine School of the Arts Box Office in the Chase Fine Arts Center on the USU campus, 435-797-8022, or at the Caine Lyric Theatre Ticket Office, open 1-8 p.m., Monday-Saturday. Tickets can also be purchased online at the CSA Box Office website.
Written by English playwright Noel Coward, Blithe Spirit tells the story of Charles Condomine, a novelist, who is haunted by the ghost of his dead wife as she stops at nothing to reclaim him. Charles is the only one able to see the ghost, and the comedy unfolds as Charles’ dead wife does her best to disrupt his current marriage.
Director Lynda Linford said although the play is whimsical, there is a deeper meaning behind the comedy. Written in England during World War II, Blithe Spirit is a story of hope, regeneration and rejuvenation, she said.
Linford teaches theatre at USU and has both acted and directed for the OLRC for 20 years.
“Noel Coward offers a fiction to make loss bearable and teaches a universal message, not to trivialize death, but to offer a whimsical situation to laugh at it,” she said.
Blithe Spirit, first performed in 1941 in London, enjoyed success in Britain and on Broadway. The play has also been revived and performed on Broadway throughout the 1970s, 1980s and, most recently, in 2009.
Featured in the major roles in the OLRC production are Keri Hostetler Larsen (Madame Arcati), Phillip R. Lowe (Charles Condomine), Colleen Baum (Ruth) and Amanda Mahoney (Elvira).
Blithe Spirit plays June 16-18, 24, 26, July 15, 23 and 29. An additional matinee showing will be offered June 26 at 2 p.m.
For more information on the OLRC’s 2010 season, visit the website.
Related links:
Writer: Jesse Dredge, Caine School of the Arts, 435-797-9203, jddredge@gmail.com
Contact: Sally Stocker Okelberry, Caine School of the Arts, 435-797-1500, sally.okelberry@usu.edu 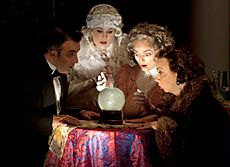 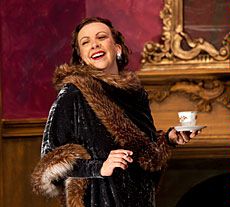