“In a study involving more than 100 radio-collared mule deer does, more than 30 percent of the deer mortalities were attributed to deer-vehicle collisions,” he said. “This coincided with increases in the number of deer occupying urban areas; a trend that will likely increase statewide.”

With winter approaching and days getting shorter, several things happen that cause the risk of hitting deer to rise, Messmer said.

“There is increased driving in the dark because of shorter days that coincides with migratory seasons and winter concentrations of deer and elk,” he said.

So who is to blame? Are there too many deer or too many roads?

The truth is that there are more of both, Messmer said. Deer populations have increased locally and so have the number of roads and drivers in the state. As urban areas encroach on winter range and migration routes, collisions increase.

“In some areas, many deer are now migrating and have taken up residence in small towns and rural areas surrounding cities,” he said. “Some of them have found an agricultural food supply, and others are being intentionally fed.”

Messmer said that while there is no quick fix to prevent deer-vehicle collisions, there are things drivers can do to reduce the chances of occurrence.

Experiments conducted with deer fences and elaborate overpasses show they can be very effective. However, they are costly.

Research conducted by the Berryman Institute suggests that the best solutions are for drivers to heed warning signs and reduce speed, Messmer said. In this study, collisions were decreased by as much as 70 percent when motorists slowed down and adhered to warning signs.

Research conducted with Idaho, Utah and Nevada departments of transportation found that the best way to get people to slow down is to use temporary signs during peak migration seasons, he said. Motorists tend to ignore permanent signs as they do not associate the signs with the relative risk.

“Really, though, the best strategy a motorist can use to reduce the risk of deer-vehicle collisions is situational awareness,” Messmer said. “Be aware that you are driving in deer country, drive the speed limit and do not drive impaired, including if you are fatigued. If you see a deer, the risk of an accident increases exponentially. Remember, though, it is usually not the deer you see that is the risk, it is the one you don’t see.” 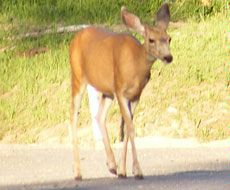