On a recent September afternoon, students from a Utah State University watershed sciences class headed to Utah’s Cutler Reservoir with the intent to learn more about the diversity of fishes found in the man-made lake. Most of the students knew very little about the characteristics and history of this unmanaged body of water, which lies in northwestern Cache County.
The reservoir was created when Cutler Dam was built in 1927 by Utah Power and Light, now a part of Pacific Corp. The narrow lake, fed mainly by the Bear, Logan and Little Bear rivers, in addition to smaller, local tributaries, meanders 12 miles with an average depth of about six feet. Because it is comparatively shallow, wind and wave action mix the water creating a warm, murky environment.
While Cutler Reservoir has visible water quality issues, its cloudy appearance leads many to believe that the water is more polluted than it actually is. Phaedra Budy, associate professor in USU’s Department of Watershed Sciences who teaches the class, says the area looked very similar prior to the dam’s construction.
“It’s more like a big, slow-moving river than a lake,” she says. “Water in the channels is constantly moving.”
Many non-native fish, ranging from the uncharismatic carp to trophy fish such as walleye and largemouth bass, thrive in the lake’s warm waters. The Utah sucker and Fathead minnow are a mere two of twelve species in the reservoir that are native to Utah waters; the rest have been introduced to Cutler from areas east of the Rockies.
Students got up close and personal with many of Cutler’s aquatic residents. They employed a variety of methods to capture fish, including experimental gill nets, trap nets, seine nets and minnow traps. As the students quickly discovered, some methods were more effective than others.
The experimental gill nets, which were placed in open water, caught more of the bigger carp as well as bass, bullhead catfish, crappie and walleye. Trap nets were used closer to shore but were not as effective in catching the many different types of fishes. Trap nets, the students learned, are used by placing a mesh barrier along open water to funnel fish into a long cylindrical net that they have a hard time finding a way out of, and so remain trapped inside until the net is pulled in and the fish removed.
“You will rarely find carp in a trap net because as they are swimming along the net wall, they realize something is not right and they leave the area,” says Gary Thiede, a research associate in the WATS Department. “Other fish aren’t intelligent enough to realize the danger, and will be caught.”
Students used seine nets, composed of mesh netting between two poles, along the shoreline to catch and examine juvenile fish that feed in the shallows. With this implement, they found a surprisingly large number of game fish, mainly largemouth bass, but also crappie, and a single bluegill sunfish.
Cutler reservoir, despite being unmanaged for fish, supports a wide diversity of game fish throughout its various sites. One such example is the walleye. Only adults are found in the reservoir. The lack of juveniles leads many to believe that the walleye are not breeding in the area but migrating from different parts of Idaho to feed on the abundance of carp.
One possible explanation for lack of breeding is the fluctuating oxygen levels brought about by algae growth. Algae is crucial in all water ecosystems and usually plays a positive role, but high levels of nutrients in Cutler allow algae blooms that use and produce oxygen in extreme amounts. Other organisms in the water that rely on oxygen are at the mercy of these microscopic creatures.
Smallmouth bass, which were conspicuously absent in the traps, are another indicator fish when it comes to poor water quality. Smallmouth bass are listed as intolerant to water degradation, whereas largemouth bass—still found in strong numbers in Cutler—are listed as moderately intolerant.
As for being a world-class fishery, Cutler’s dual life as an oasis and a wasteland is called into question. If managed, Cutler’s potential as an active fishery is great. The reservoir already holds the state record for bullhead catfish as reported on the Utah Division of Wildlife Resources Web site. The fish, caught in 1999, weighed in at a whopping 3 pounds, 4 ounces and was 16 inches long. But with Cutler’s water quality in jeopardy, the lake’s future as a fishery remains a question mark.
Related links:
USU Department of Watershed Sciences
USU College of Natural Resources
Contact: Phaedra Budy, 435-797-7564, phaedra.budy@usu.edu
Writers: Erin Fleming, Heather Godding, Wes Gordon, Joshua Taylor Green, Constantine Itkowitz
[The authors of this feature are Watershed Sciences students. The piece was originally completed as an assignment for WATS 3100, Fish Diversity and Conservation. The instructor for the course is associate professor Phaedra Budy.] 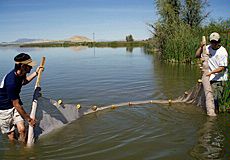 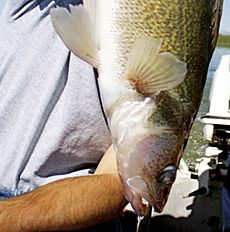