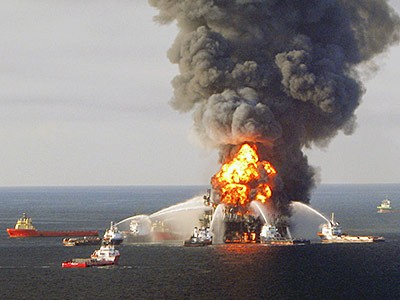 The soon-to-be-released thriller Deepwater Horizon, which opens in theaters Sept. 30, promises moviegoers a chilling reenactment of one of history’s worst oil rig disasters. Utah State University professor Joseph Tainter will be among those waiting in line to see the new flick, which offers a heart-rending restaging of oil rig workers making split-second decisions and fighting for their lives during the 2010 Gulf of Mexico catastrophe.

Like other fans, Tainter will be on the edge of his seat, but the renowned scholar of societal collapse will also enter the theater with a big-picture view of the perfect storm of factors that led to the explosion and oil spill that killed 11 people and sent more than 200 million gallons of crude oil spewing toward the nation’s southern coastline for 87 days.

Tainter delved into the Deepwater Horizon disaster and, with colleague Tadeusz “Tad” Patzek of the University of Texas-Austin, published Drilling Down: The Gulf Oil Debacle and Our Energy Dilemma in 2011. The book details specific causes of the Deepwater calamity, explores society’s current energy crisis and calls for discussion on future energy solutions.

“It takes energy to find and produce energy and the world’s remaining, untapped petroleum reserves are in deep, dark, cold, remote and dangerous locations,” he says. “We need highly sophisticated technology and equipment to meet our energy demands.”

Oil has fueled an unprecedented standard of living in the United States and many parts of the world, but it won’t last forever, says the historian and anthropologist whose 1988 book, The Collapse of Complex Societies, remains a definitive work on societal collapse. As societies grow more complex through the bounty of cheap energy, Tainter says, they also confront problems that seem to increase in number and severity.

In the 1940s, when the U.S. petroleum industry hit its stride, the net cost to produce oil and gas was about 100 to one.

“It cost about one barrel of oil to produce 100 barrels of oil,” Tainter says. “Today, that ratio is about 15 to one in the United States. Though it varies throughout the world and oil prices are currently depressed, the trend is clear. Energy is becoming very costly in terms of resources, safety and environmental health.”

Alternative energy provides a possible solution, but is a challenge to implement, he says.

“We have some hurdles to clear with the infrastructure needed to make renewable energy a viable replacement for fossil fuels,” Tainter says. “Alternatives such as biomass, solar and wind power require large land acquisitions and a distribution network that doesn’t yet exist.”

Looking into the past, we can see that cheap energy and increasing complexity have contributed to a mutually reinforcing spiral, he says. “We’ve become dependent on an energy source that can’t sustain us indefinitely and we have to figure out what to do about it.” 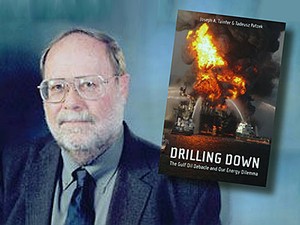 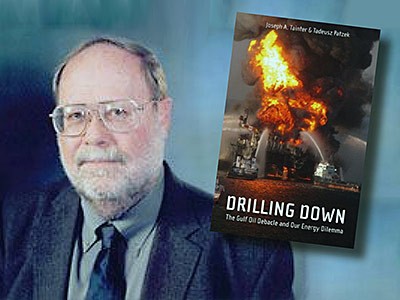