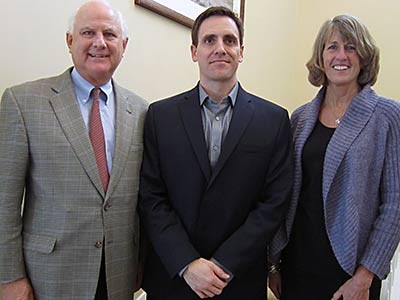 Utah State University economics professor Frank Caliendo was honored to speak as part of the university’s “Inaugural Lecture Professor Series,” where he was celebrated for reaching the level of full professor. Caliendo, department head of the Economics and Finance Department in the Jon M. Huntsman School of Business, presented “A Decade in Cache Valley” as part of the lecture series hosted at USU President Stan L. Albrecht’s university home.

Caliendo became a faculty member at USU in 2006, but his connection to the university has been interwoven into his identity over a lifetime. In the 1980s Caliendo and his older brother, Tony, would ride their bikes to campus to explore, and to visit their father, who was earning a doctorate. The campus was their playground and the young boys would spend their allowance on arcade games and treats from vending machines in the student center.

When Caliendo started as a student at Utah State he was unsure of the major he should choose.

“Economics was never really something I knew about before college,” he said. “I think I took an economics class in high school, but I don’t think I really grasped really what was going on. I took some classes from some very good professors here at USU who were very inspiring. I found the material exciting and I gradually realized I wanted to have a career as a professor in economics.”

Caliendo originally debated whether to major in mathematics or fine arts. Luckily, he found that economics was able to blend these two passions.

“What’s kind of interesting is that I think economics is a lot like both of those,” Caliendo said. “The economics that I do is very, very mathematical and I would not be able to survive without the math training that I’ve had from the math department. But there is a certain art to economics that appeals to me. So, economics feels like a natural marriage between math and art.”

Since earning both a bachelor’s and doctorate in economics from Utah State, Caliendo has spent his time teaching, conducting research and focusing on publications. He has had the privilege of working with many co-authors and mentors that have deeply impacted his career.

“In trying to think about a couple mentors, in particular, who have shaped my interests and my skill set and the way that I approach research, I would have to single out Ken Lyon and Kevin Huang,” Caliendo said. “I think the kind of research I do and my style of work comes from their influence. They’ve really made a lasting impression on me. I would want to mention 10 to 20 other mentors if I had the time and space but those two, I think, in terms of what I do now have left the deepest impression on me and on my research program.”

Caliendo further stated that USU has been good to him and that he is proud to be part of the institution that has been with him for most of his life — first as an undergraduate student, then as a graduate student and finally as a faculty member, associate dean and department head.

“Reflecting back on my years at USU leaves me wanting to give back as much as I have received,” Caliendo said. “USU has helped me every step of the way, from full-tuition support as an undergraduate, to a full-tuition waiver and stipend as a graduate student. Today, I receive a generous salary and research support as a faculty member allowing me to pursue all of my professional interests while providing comfortably for my family. I will always be grateful for Utah State University.”