After months conducting research on the air quality in Cache Valley, Utah State University College of Engineering student Crystal Viator took first place for her poster design and presentation at the June 2006 meeting of the Air & Waste Management Association.
Viator, a junior in the environmental engineering program, presented “Wintertime Vertical Ozone Distribution in Utah’s Cache Valley.” The poster outlined the region’s winter weather conditions’ effects on ozone.
“I had to learn a great deal about the air situation in Cache Valley,” Viator said. “I found that ozone is a hot topic in air quality and that many cities are facing the same problems as Cache Valley.”
In order to conduct research for the project, Viator said she made two flights at four different elevations along the length of Cache Valley. During the flights she monitored ozone concentrations and temperatures.
The project was unique because Cache Valley’s air quality is at the front of environmental concerns. The opportunity went beyond what most universities are able to offer students, Viator said.
“I have been able to work with my professors and learn to think through problems to find solutions,” Viator said. “That is when learning really takes place. It becomes an education that can be directly applied in my career.”
Viator won the undergraduate portion of the poster competition and ranked fourth among all students, including graduate students. The poster was on display for the duration of the conference and during the presentation she was able to give the judges an explanation of her research.
The AWMA meeting was a first for Viator, who said she was introduced to the program by her professor, Randy Martin. Viator began working for Martin, a civil and environmental engineering professor, and his team at USU’s Utah Water Research Lab in spring 2006.
Contact: Randy Martin, 435-797-1585 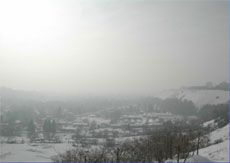 An example of a serious Cache Valley inversion. (Images and graphics taken from the Cache Valley Temperature Inversion (2003-2004) Web site. 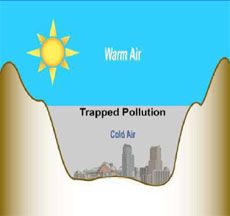 This graphic illustrates the conditions that take place during an inversion.