Utah State University physics professor Farrell Edwards entered an April 16 banquet in his honor in genuine astonishment.
“I’m overwhelmed, thrilled and thank you so very much,” Edwards told nearly 200 guests who joined him at the Logan Country Club for a surprise celebration of his 50th anniversary at USU. “I wish you a pleasant 50 years to come — I’ll still be here.”
The 77-year-old thought he was going to a fundraiser to aid his grandchildren’s choir program, said Eric Held, associate professor of physics, research colleague of Edwards and a party organizer. “Farrell’s wife, Ann, helped us come up with a plan.”
At the gathering attended by Edwards’ ten children and many of his grandchildren, colleagues, former students and family members reminisced about the longtime professor’s achievements and offered a generous share of good-natured roasting.
Physics department head Jan Sojka recalled an early encounter with Edwards, when the latter cavorted in his trademark orange superhero cape emblazoned with the phrase, “Phearless Farrell the Fizisist.” The occasion was a 1978 gathering of undergraduates, to whom Edwards was demonstrating the lighter side of physics.
“He never takes himself too seriously,” said his son Boyd Edwards, USU alum and Russell and Ruth Bolton Professor of Physics at West Virginia University. “He inspires students to think deeply and question authority.”
The younger Edwards describes his father as an innovator and nonconformist, who pursues research “not on the edges where topics are hot but in the cold, forgotten center.”
Edwards said his father counsels the same approach to life and research: “Ask deep questions, take risks, enjoy the journey and be satisfied with the result.”
Douglas Lemon, a former student of Edwards and director of USU’s Space Dynamics Laboratory, praised his mentor’s encouragement and inspiration.
“He made physics fun — he took the fear out of physics,” said Lemon, who first met Edwards nearly 40 years ago when the professor spoke to the then-teen and his classmates in Sky View High School’s science club.
Lemon noted that SDL is full of Edwards’ former students, ranging from scientists and engineers who took his classes decades ago to current undergraduates.
“As I asked them about their experiences with Farrell, I heard the same things over and over,” he said. “They describe him as caring, enthusiastic and a terrific teacher.”
Lemon expressed gratitude to his former professor, who was instrumental in SDL’s early years and is contributing to research in the recently established USU Energy Lab. Edwards’ current research on renewable energy, including investigation of plasma containment and the possible development of a fusion neutron generator, will play a key role in the USTAR-funded lab’s future, he said.
Longtime colleagues Eastman Hatch, emeritus professor of physics, and USU Vice President of Advancement Ross Peterson also spoke at the gathering.
“In five decades, Farrell’s legacy is his students,” Peterson said. “Aside from his family, his imprint is on his tremendous community of students who are making an impact throughout the world.”
In Edwards’ honor, the Physics Department announced the establishment of the Farrell and Ann Edwards Scholarship Endowment to annually recognize outstanding students pursuing degrees in physics teaching. Inaugural recipients of the award, announced at the banquet, are current USU students Jared Gee, Justin Gudmundson, Milo Maughan, Brent Rose and Andy Spencer.
“Beyond the age when many in his profession have retired, Farrell is amazingly active as a researcher, teacher and mentor,” Held said. “He’s a role model, an inspiration and a friend.”
Related links:
“Bottled Sun,” Utah State Greats
USU Department of Physics
USU College of Science
Contact: Farrell Edwards, (435) 797-2855, farrell.edwards@usu.edu
Writer: Mary-Ann Muffoletto, (435) 797-3517, maryann.muffoletto@usu.edu 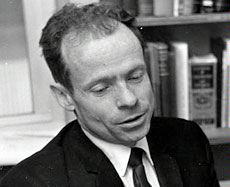 Physicist Farrell Edwards, pictured in a 1970 photo, is celebrating 50 years as a USU faculty member. An enthusiastic scientist, Edwards counsels students to 'ask deep questions, take risks, enjoy the journey and be satisfied with the result.' 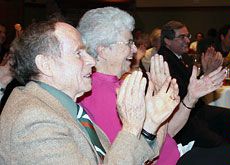 Edwards and his wife, Ann, where honored at a surprise banquet April 16, celebrating his 50th anniversary at USU. 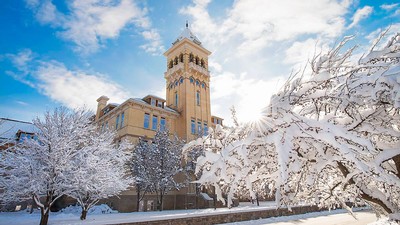