Five recipients will be honored at the 14th Annual Utah State University Diversity Awards ceremony Friday, Nov. 16. The ceremony begins at 4:15 p.m. in the Taggart Student Center’s Sunburst Lounge and all are invited. The ceremony is part of Diversity Week activities at USU.
Steven H. Hanks, John E. Ribera, Hector Mendiola, Ariel E. Rosario and Kelly Johnson are the 2007 recipients of the honor, which recognizes individuals on campus and in communities served by USU who have made significant contributions to affirmative action, equal opportunity and diversity.
Hanks was honored in the category of administrator. He is a vice provost at USU who creates opportunities for students to study abroad, and he also works with international students who come to USU. Hanks is heavily involved with about 750 international students from all over the world, with the largest contingents coming from the Dominican Republic, India, China, South Korea and Japan. He served as dean of the College of Administrative and Financial Sciences at the Arab American University in the West Bank in the Middle East. He lived and worked in an international environment, which allows him to give “first-hand” advice to students.
Ribera, associate professor in the Communicative Disorders and Deaf Education Department in the College of Education and Human Services, was honored in the category of faculty. Ribera was active in diversity issues through his many assignments while serving in the U.S. Army. He has provided opportunities for his students to experience services to diverse populations by taking graduate students in audiology to Baja, Mexico, to provide health and hearing screenings to orphanages and work camps. Ribera also brought the Multicultural Messiah to Cache Valley. This performance, which began five years ago, is the only one in the nation that includes English singers, Spanish singers and American Sign Language singers.
Mendiola, an Extension educator and director of Spanish Programs for Cache County Extension, received the award in the staff category. He is a retired physician from Mexico who has been active in the community for more than 10 years. He and his wife, Margarita, received the USU Diversity Award as community members in 1996. Mendiola was nominated primarily for his work with Logan High School students and families. The nominators were consistent in their praise for his many hours of selfless service, which were “above and beyond the call of duty.” He has worked with numerous organizations to develop partnerships that bring opportunities to multicultural students and their families.
Rosario was honored in the student category. Rosario received his bachelor’s degree in electrical engineering and expects to receive an MBA in December 2007. He is from the Dominican Republic and attends USU on a special program where his education is funded by the Dominican government. He is required to return to his country to use the skills obtained through this education. Rosario has shown that he understands the value of diversity from the time he first arrived on campus in August 2000. He requested that his roommate be American so he could work on his English as well as learn the culture he would be living in for the next several years. He has organized the Dominican Student Association at USU to allow his group to share their culture with the community.
Johnson, training coordinator at Swift Beef Corporation in Hyrum, is the Diversity Award recipient in the community category. Johnson has worked at Miller’s Meat/Swift Beef Company for 27 years and was named training coordinator when he was 21 years old. He was the first to hold this position so it was his responsibility to define it. He took Spanish classes in the evening so he could communicate with his Latino workers, and he organized the workers into small, ethnically diverse teams in order to better foster feelings of collegiality and friendship. Johnson supervises 12 trainers at Miller’s/Swift. He brought together the assets and talents of LDS Church members (Spanish and English) and other community organizations to support and assist those left behind and impacted by the ICE raids in December 2006. These organizations helped with food, clothing, comfort and information, and they provided help during the holidays. Months after this event, Johnson continues to use Scout organizations and other volunteers to assist the affected families.

For more information about the awards, call the Affirmative Action/Equal Opportunity Office at USU, 435-797-1266. 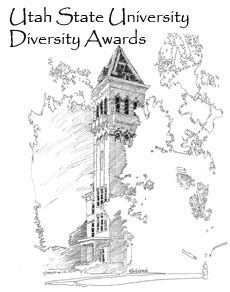