Aside from owning Blue Sage, Simpson also teaches catering and new world cuisine classes at USU. His catering students have been able to watch the restaurant develop and even help with some of the labor.

Through the process, they have gained real-life experience and have been able to take a glimpse into their future career possibilities and options.

Schuyler Smith, a sophomore majoring in culinary arts, had the opportunity to observe the restaurant's stages of development and also was able to try making some of the dishes himself.

"The food at Blue Sage is amazing," Smith said.

Robert Sanderson, the chef at Blue Sage, said he did a lot of traveling and research to develop the menu.

"Right now, I am working on a dinner menu, which should be coming out later," he said. "The lunch menu was especially fun."

Sanderson said that everything at Blue Sage is made to order. Everything is fresh. They don't serve the typical canned items that are warmed up once the customers come.

Simpson describes the menu and atmosphere at Blue Sage as unique.

"Blue Sage is eclectic," he said. "Its diversity and classy style is a gem in Cache Valley."

According to information from the restaurant, Simpson's love for food and cooking began early in life. While growing up in Cache Valley, his parents owned and operated a drive-in restaurant in Hyrum where the McDonald's now stands. His mother also owned Sydney's Lunch Truck for many years.

Simpson worked in Logan as a cook and also at a restaurant at the Snowbird Ski Resort. He has studied at the California Culinary Academy in San Francisco and apprenticed under specialty chefs in the San Francisco Bay area for 11 years.

He has also worked as a restaurant design consultant in New Mexico and has opened up his own restaurant and catering company in California before returning to Cache Valley to stay.

Aside from owning the restaurant, Simpson also owns his own catering business called Culinary Concepts, which is run out of the back end of Blue Sage.

Simpson is the executive chef for Culinary Concepts and offers full-service catering for special occasions such as weddings and receptions.

They offer delicacies like hand-rolled strawberry crepes topped with fresh cream and fresh, wildberries, as well as dishes like honey-glazed ham, chef-carved roast beef and penne pasta with gorgonzola cheese.

Culinary arts students have also been able to observe the catering company's success, as well as Blue Sage's, because of the catering class at USU.

The restaurant welcomes all to come and visit and hopes that its success will stem primarily from word of mouth. 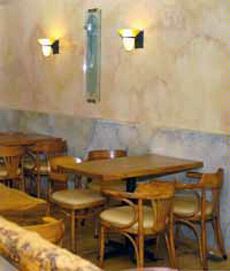