Former Utah State University four-sport standout Jay Van Noy passed away at his home in Logan Saturday [November 6, 2010] at the age of 82. Van Noy competed in football, basketball, baseball and track during his time at Utah State.
On the gridiron, Van Noy earned four varsity letters (1946-49) and was a two time first-team all-Mountain States Conference selection. He played in two of Utah State's six bowl games all-time (1946 Raisin Bowl and the 1947 Grape Bowl), and finished the 1948 season second in the nation in rushing. In a 22-17 win against Arizona State in 1948, Van Noy rushed for a then school record 242 yards, a mark that still ranks third all-time in school history. He also had an 82-yard run against Wyoming during his junior campaign, which still ranks eighth all-time at USU.
On the hardwood, Van Noy was a member of the 1947 and 1948 Aggie basketball teams and lettered four years in baseball at USU.
Following his collegiate career, he was drafted in the 10th round of the 1950 NFL Draft by the Los Angeles Rams, but instead played professional baseball making it the Major League's with the St. Louis Cardinals in 1951.
Van Noy was inducted into the Utah Sports Hall of Fame in 1997 and the Utah State Athletics Hall of Fame in 2007. He was listed by Sports Illustrated as one of the top 50 athletes from the state of Utah all-time.
Additional Aggie sports news is available at the Athletics website. 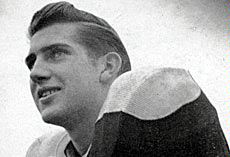 Former Utah State four-sport standout Jay Van Noy passed away at his home in Logan Saturday at the age of 82. Van Noy competed in football, basketball, baseball and track during his time at Utah State. (Photo from Athletics website.).