Utah State University researcher Frederic Wagner has been selected for The Wildlife Society’s 2008 Wildlife Publication Award – Outstanding Book for his book ‘Yellowstone’s Destabilized Ecosystem: Elk Effects, Science and Policy Conflict.’ Wagner, emeritus professor in the College of Natural Resources’ Department of Wildland Resources, will receive the award in a ceremony during the society’s November annual conference in Miami.
“Yellowstone National Park is the flagship of the National Park System,” Wagner says. “But, in terms of managing the park’s ecosystem, NPS officials have missed the mark. Certain policies have been driven more by politics than valid science.”
His book, published in 2006 by Oxford University Press, examines more than 140 years of the park’s management history, which he divides into several phases.
Signed into existence by President Ulysses S. Grant in 1872, Yellowstone is the world’s oldest national park. During the park’s early years, Wagner says, officials adopted management practices that protected elk and enabled herds to significantly increase.
In the latter 1920s, park officials began trapping elk and relocating them to other areas throughout the American West. A sizeable portion of today’s elk in Utah, he says, are descendents of those translocated animals.
“By the 1930s, park rangers were directed to start shooting elk,” Wagner says. “That practice continued through the 1960s and the largest wintering elk population dropped from an estimated high of 40,000-35,000 animals at the turn of the 20th century to about 3,172 by 1968.”
The comparatively small number probably mirrored the number of elk found in the area during pre-Colombian times, he says.
“In 1967 the NPS introduced a ‘Nature Knows Best’ approach and stopped controlling the size of the herd,” Wagner says. “A new contingent of NPS research biologists disputed earlier scientific evidence and claims about best management practices of elk and other wildlife in the park. In the process, they totally negated everything that had been observed, recorded and published for nearly a century.”
Once again, elk numbers surged and the subsequent impacts rippled throughout the park’s ecosystem, he says. Elk decimated stands of aspen and willows by chewing the trees down to the nubs.
Reintroduction of the wolves to the park in 1995 reduced elk numbers and changed their distribution, Wagner says, “But, so far, there has not been a major response of the vegetation and other parts of the ecosystem.”
In the final chapter of his book, Wagner describes how management policies should be established in national parks, focusing particularly on Yellowstone.
“Policies should be illuminated by valid science and set collaboratively by combinations of concerned public interests – not by noisy, individual political pressures,” he says.
Related links:
USU Department of Wildland Resources
USU College of Natural Resources
Contact: Frederic Wagner (435) 797-2852, [fwagner@cc.usu.edu]
Writer: Mary-Ann Muffoletto (435) 797-3517, [maryann.muffoletto@usu.edu] 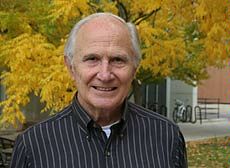 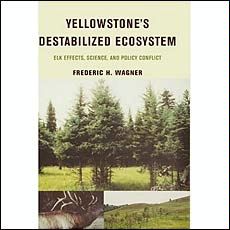