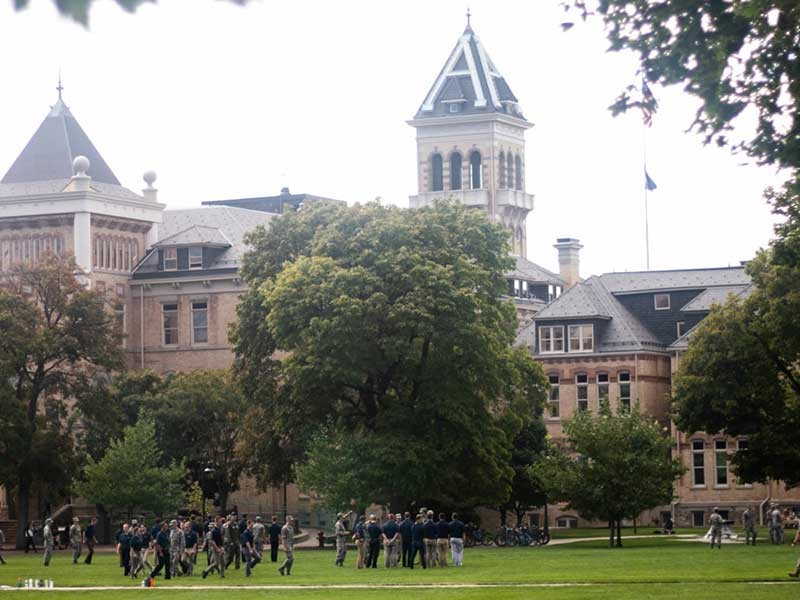 The Quad is one of the first things that many students see when first visiting Utah State University. Centered between Old Main, the Merrill-Cazier Library and Luke’s Cafe, it is one of the busiest spots on campus from being host to events to having students walk across it, rushing between classes or even just studying on the grass.

“It’s such an integral part of this campus. It’s easily identifiable and everyone knows what you mean when you say ‘meet me on the quad,’ right?” Jeremy Bradshaw, a business student said as he lounged in the grass studying between classes. “It’s such a beautiful place to just sit and enjoy your day. I honestly, couldn’t imagine USU without it.”

Bradshaw isn’t the only person who couldn’t imagine USU without its iconic quad, Robert Parsons, a university archivist who spends much of his time in the basement of the Library, says that “it would be a travesty” if anything was ever built on the Quad.

“Nothing except common sense prevents anyone from building on the quad,” Parsons said. “The school opened in 1890 and only the south wing of Old Main existed. That’s where school was held and at that time you had the president’s house, the experiments station and the model barn, that’s all there was,” Parson explained.

In 1890, there was no tower on Old Main and if one looked behind it, there was nothing in the place  where the quad is today. That area was used for irrigation and agricultural experiments until 1912 when President Widstoe hired the architectural firm of Pray, White and Hubbard to commission the first campus master plan. This master plan changed to what would become USU 100 years later.

“The Ray B. West building, Family Life, Geology and other buildings that are on the quad was all laid out in 1912 but it was a long time after that until any of those buildings would be built,” Parsons said. “Things have moved a lot. The agricultural building used to be the library and what’s now a parking lot used to be a building.”

According to the plans made in 1912, the architects didn’t account for what type of trees and other ornamentals to plant on the grounds but instead left a wide area of land open. The only thing in the middle of the ground were 10 criss-crossing walkways that formed two almost pentagon shapes. This area throughout the year was simplified into a quad formation, first crossing diagonally and then changing to the cross formation that is currently known as The Quad.

“Why it’s called the Quad, I don’t know when that word was first used, but it’s laid out in four sections and it’s just become a staple of American college campuses, coming from the east coast,” Parsons said.

Whether students are studying, enjoying various festivals or concerts, or even just studying between classes, The Quad remains a landmark for Utah State University.