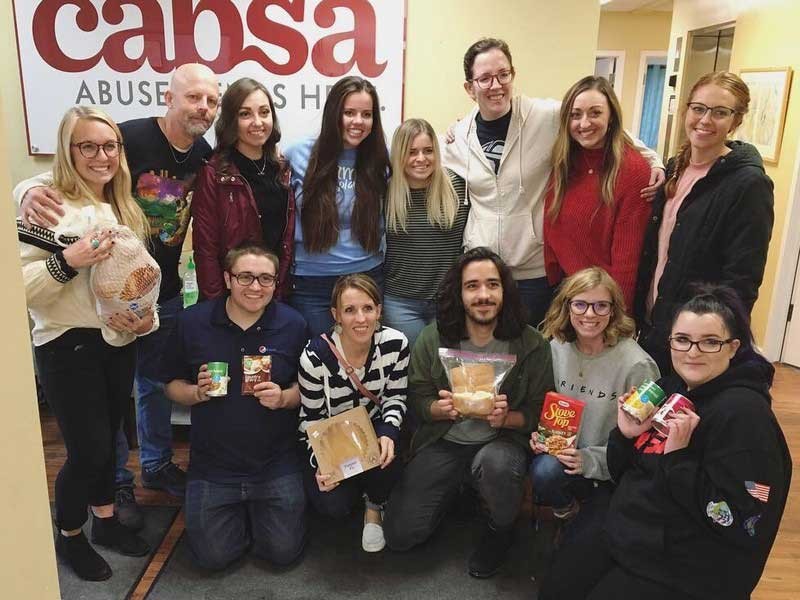 Shannon Browne, an associate clinical professor of social work (back row, second from left), stands with student volunteers displaying all the types of food that made it into the Thanksgiving meal boxes they assembled and donated to 102 families.

“Helper therapy” is now more than simply a textbook concept for some 50 social work students.

That principle says when you serve others, you’re actually healing your own psyche. Indeed, service is a significant part of social work, said Shannon Browne, a clinical associate professor of social work. But on the Tuesday before Thanksgiving, the concept was reaffirmed for the social-workers-in-training.

The students — from freshman to senior —  filled more than 100 boxes with all the essentials of a robust Thanksgiving dinner, each designed to feed a family of six.

“You see all the food, and you realize this is going to feed 600 people for Thanksgiving,” said Browne. “Yeah, I think everyone feels the benefits you get form helping others. It’s a good feeling.”

The Thanksgiving service tradition, now in its 12th year, is the largest project of the year for an organization, the Social Work Students Association, that organizes such projects monthly. 2018, with 102 food baskets, proved to be the biggest in the event’s history.

“Our students give us many reasons to be proud,” said Browne, “and this is one of them.”

Boxes were filled with Thanksgiving dinner essentials (yes, even cranberry sauce), which were then delivered to two Cache Valley-based non-profits: The Family Place, an agency that through workshops and counseling seeks to build stronger families, and CAPSA, a domestic violence, sexual abuse and rape recovery center.

The students canvassed local grocery and other stores, seeking donations of food and cash. Cash contributions were also sought from USU students through the digital wallet Venmo, with dozens of $1 or $2 donations pouring in, he said.

However, Browne says, the event is about more than good vibes. It’s about understanding.

“One of our key values in social work is service,” he said. The student club SWSA was created, he said, “with the goal of having a monthly service project so students can get used to doing what we do as social workers.”

In the Department of Sociology, Social Work and Anthropology, part of the College of Humanities and Social Sciences, Browne teaches what are called practice classes, focusing on the theory and practices of individual and group therapy, child welfare and law and ethics. In their senior year, social work students are required to complete a 480-hour practicum at an agency where those practices are put to work.

But at this particular moment, Browne is proud that the students went beyond a “bare-bones Thanksgiving meal, like a turkey and instant potatoes.” The boxes contained “everything that most people eat for Thanksgiving: a fresh turkey, six or eight real potatoes, a pie, canned beans, canned corn, cranberry sauce, stuffing, gravy packs, rolls,” he said. “We make sure we’re giving them everything they need so they’ll have some leftovers for the weekend as well.”

The professor said he hears, anecdotally, how the annual food boxes encourage and inspire. Recently, one of his many former students now working at the Family Place and CAPSA, gathered current students around her.

“She told them about receiving a call from a single mom in an abusive relationship," Browne said.

“The mom asked if students were doing the boxes this year. My former student said, ‘Yes, they’re going to be here this evening if you’d like to come get one.’ The woman just started bawling on the phone, saying ‘This is such a lifesaver, I wouldn’t have had anything to make a Thanksgiving meal’

“I hear stories like that every year,” he said. 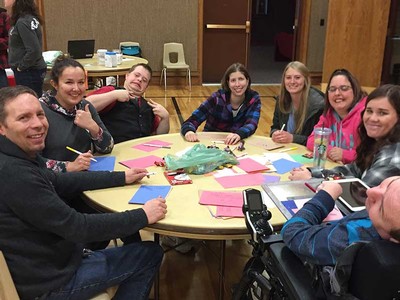 A group of social work students teamed with clients of Common Ground to create colorful Thanksgiving cards to place in donated food boxes. Common Ground is a non-profit that provides recreational opportunities for youth and adults with disabilities. 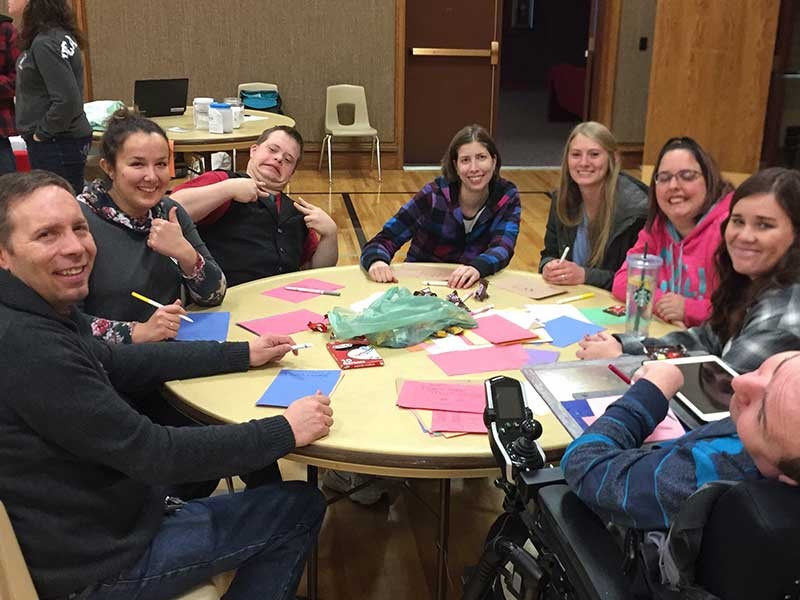 Madsen will join the university as a professor in the Marketing and Strategy Department of the Huntsman School beginning July 1, and will have a joint appointment with Utah State University Extension. 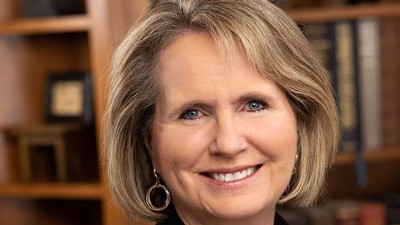 The mentorship program at USU has helped increase the number of Indigenous students attending the university.