A farewell reception was held April 24 for Juan Franco who will soon leave Utah State University soon for Nebraska, where he has been named vice chancellor for student affairs at the University of Nebraska-Lincoln. He assumes his new role July 1.
During the reception, Utah State University President Stan Albrecht made a special award, presenting Franco with the 2006 USU Diversity Award in the administrator category. The diversity awards are usually presented during the fall.
USU annually recognizes individuals for their work in enhancing diversity and developing an environment where diversity thrives. Franco was honored for his exemplary efforts during his tenure as vice president for student services at USU.
“It is difficult to quantify the many things Dr. Franco has done to enhance diversity at USU,” his award citation read. “In his position as vice president for student services, he has done much to advance diversity on campus, managing to make it look as a natural and logical evolution of campus life.”
Franco is known as a student advocate. He helped acquire more than $100,000 in scholarship support for Native American students. He regularly attends student government meetings, staying abreast of issues and concerns facing students. He supported the establishment of the “Allies on Campus” program, and he established a service-learning program to help all students participate in the life-long lessons learned through service to the community.
One year after his arrival on campus, the USU Statesman named him 2004 Administrator of the Year.
“We wish Dr. Franco well as he leaves campus,” President Albrecht said. “We are pleased to honor him with the 2006 Diversity Award but it is with regret that we say goodbye. He will be greatly missed at Utah State University.” 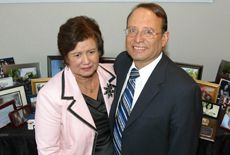 Juan Franco and Elisa Franco at the farewell reception. Juan Franco is the recipient of the 2006 USU Diversity Award in the Administrator Category.