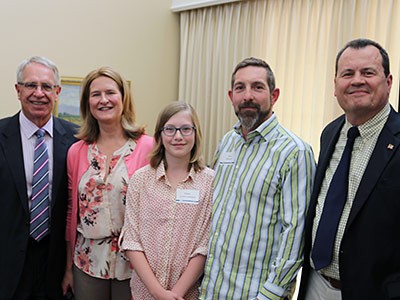 USU President Stan Albrecht (far left) and College of Agriculture and Applied Sciences Dean Ken White (far right) congratulated Kopp (second from left) at her Inaugural Professor Lecture. For the occasion, Kopp was joined by her daughter, Emma, and her husband, Steve Whitesell.

“It’s rather poetic and appropriate that I am giving this lecture during USU’s Year of Water since, for me, it has been an entire career of water,” the plants, soils and climates professor and Extension water conservation and turfgrass specialist said.

“Turfgrass? Are you kidding me?” she recalled saying when she was first offered a graduate assistantship to work on her doctorate while at the University of Connecticut. “I was all about food, fiber and feeding the world; who cares about grass?”

Then her professor told her there is more land covered by turfgrass in this county than any other irrigated crop.

That got my attention, she said.

“My grandparents worked on the family farm and only one of them graduated from high school,” she said. “My father was the first one to get a college degree attending Cornell not far from his family’s farm in upstate New York. One of the favorite family stories was that when dad came home from college they would only be able to drive him halfway back because they had to get back to milk the cows.”

“My mom was going to Ithaca College and she met my dad on a blind date,” Kopp said. “She is also responsible for convincing him join the Peace Corps where they became some of the first volunteers in the 1960s.

“My brother and I were born in Africa and might have stayed there but at the time ex-pat children were required to go to school in England. Since my parents didn’t want to be separated from their children we moved to southern Texas where my parents managed a farm.

It was there that I had my first experience with soil in an orchard that surrounded the farm.

“I went on to attend Texas A&M and wasn’t sure what to major in until I stumbled upon a program in natural resource conservation that allowed me to take classes across campus. The day I sat down in my first basic soils class changed everything. It immediately took me back to my childhood and playing the dirt on the family farm. I took every soils class I could, including soil microbiology. One of my professors there encouraged me to consider graduate school and the next thing you know I was off to the University of Connecticut.”

Then the trip to Utah happened.

“Susan Buffler, then a research assistant at USU who had also been a graduate student at Connecticut invited me to spend some time exploring Utah after a research meeting in Salt Lake City” Kopp said. “I had literally never seen Utah before. It was like no other place I had been. About two years later after I had graduated Susan told me about the opening for the position I now have.

“Before moving to Utah my research in water had mainly been about excess water that causes water quality issues. “Here, water was a precious resource.”

Among many others, Kopp thanked Noelle Cockett for being such a successful researcher and administrator and inspiration to women on campus.