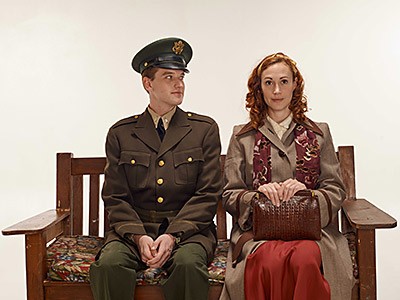 "Last Train to Nibroc" is the second play to open at the Caine Lyric Theatre as part of the Lyric Repertory Company's 2015 summer season. The two-character play features Stephen Humes as Raleigh and Blythe Coons as May. The production’s opening performances are June 17-19 and then in repertory with the company’s additional three productions.

Last Train to Nibroc is the second show in repertory at the Caine Lyric Theatre this summer. Performed by the Lyric Repertory Company, a summer theater program based at Utah State University, the play opens June 17.

The play looks at life and more in the 1940s and features sincere and honest May, and soldier, aspiring writer and all-around good guy Raleigh, who develop an unexpected friendship as they travel by train from California with the coffins of Nathanael West and F. Scott Fitzgerald. Their dreams lead them to separate destinations, but they are reunited at the Nibroc Festival a year and a half later.

“I think the play will be nostalgic for many, not just because it’s based in the early 1940s, but because people love to think and speak about how they first met their significant other and the ups and downs of relationships,” said Blythe Coons, who plays the role of May. “If May and Raleigh were real, they would have been a featured couple in ‘When Harry Met Sally.’ The path to lifelong partnership and love can get ugly, and I think it is that truth about love that will be very familiar to people.”

The play is a heartfelt, honest story of love between two young characters who are growing up in an ever-changing world, Stephen Humes, who plays the role of Raleigh, said.

“It is a seemingly simple story, but Raleigh and May are on very complex emotional journeys that make them fascinating characters to follow,” Humes said. “I think audiences will become quickly invested in their relationship.”

Director Adrianne Moore, a faculty member in USU’s Theatre Arts Department, said since there are only two actors in the play, it gives her the opportunity to work with them in an intense, specific way.

“There is a lot more time to spend on characterization and relationships and really being very particular about moment to moment work,” Moore said. “You work in a particularly intense sort of way when there are just two people there. My focus is completely on them for the whole time and they also have to be very focused on each other.”

You have to have complete trust in your scene partner on stage and you have to trust that your director will guide you towards a successful performance, Humes said.

“We get to make new discoveries in every rehearsal, which makes for an exciting creative atmosphere,” he said. “It is a real luxury for us to be able to work so intimately with our director and with each other, and I consider myself very lucky to have the experience.”

There are three scenes in the play. The action begins on a train west of Chicago, goes to a park bench near a woods and ends on May’s front porch.

“It’s very charming,” said Moore. “It portrays the complicated, gray area emerging into adulthood and making decisions about where your life is going to go and what’s important to you. In that respect, it will be of interest to audience members looking back and reflecting on their lives and college students who are at the stage of life where the world is their oyster.”

Also part of the Lyric Rep 2015 season are Noises Off, The Mystery of Edwin Drood, opening June 24, and And Then There Were None, opening July 1.

For more information and tickets, visit the Caine College of the Arts Box Office located in room L-101 of the Chase Fine Arts Center, call 435-797-8022 or see the Lyric Rep’s website. The box office is open from 9 a.m.-noon Monday through Friday. Tickets may also be purchased at the Caine Lyric Theatre in downtown Logan at 28 West Center Monday through Friday 1-4 p.m. and one hour prior to curtain on show dates.