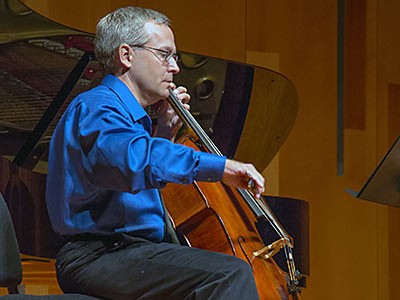 Cellist Stefan Koch will be joined by pianist Robert Conway as part of USU's Visiting Artists and Scholars Series presented by the Caine College of the Arts. They perform Friday, Feb. 19, 7:30 p.m., Caine Performance Hall. The evening’s program is devoted to the works of Austrian composer Richard Stöhr.

Stefan Koch, cellist, and Robert Conway, pianist, perform Feb. 19 at 7:30 p.m. in the Caine Performance Hall as part of the Caine College of the Arts’ Visiting Artists and Scholars Series at Utah State University.

Koch and Conway will perform works of Richard Stöhr, an Austrian who composed in every classical genre and was a renowned composer, teacher and author. In 1938 Stöhr was forced by Nazis to emigrate to the United States where he taught at the Curtis Institute, the Vermont Conservatory and St. Michael’s College. Among his students were musicians Samuel Barber, Leonard Bernstein and Marlene Dietrich.

Koch received musical training at Temple University in Philadelphia, where he studied with Hirofumi Kanno and Orlando Cole. Currently residing in Ann Arbor, Michigan, Koch is a member of the Lansing and Birmingham-Bloomfield symphonies and is a frequent performer with the Kalamazoo, West Michigan, Toledo and Grand Rapids symphonies. He spends summers at the Utah Festival Opera and Musical Theatre in Logan.

Robert Conway, associate professor of piano and music history and director of piano at Wayne State University, has performed regularly as orchestral keyboardist with the Detroit Symphony Orchestra. He has been a musical representative of the United States as an Artistic Ambassador of the U.S. Information Agency as well as acting as a Department of State Cultural Envoy to Jamaica and Azerbaijan. Conway studied at the New England Conservatory and the University of Michigan.

Together, Koch and Conway are giving the first United States performances of Stöhr’s work. Their CD of his music was released on Toccata Classics in 2014.

Tickets for the performance are $10 adults, $8 seniors/youth, $5 USU faculty/staff and free for USU students with ID. For more information contact the CCA Box Office located in room L101 of the Chase Fine Arts Center on USU’s Logan campus, call 435-797-8022 or see the college’s website.