Lighting up USU with Indian Tradition

When traveling to a new country to attend school, international students are bound to run into some cultural differences. People may not speak the same language, eat the same food or even celebrate the same holidays.

For many of USU's almost 200 international students from India, the cultural transition from southern Asia to the western United States can be a difficult one.

To help students from India feel more comfortable in Logan, a nonprofit organization on campus called the Indian Student Association hosts traditional Indian celebrations so Indian students can celebrate holidays they are familiar with. These events, Kavathekar said, are open to all interested USU students of any nationality.

"We try to celebrate all the big Indians' festivals, because we miss a lot of them while we're here," Kavathekar said. "It's a way to make the Indian students feel more at home."

This Saturday [Oct. 22] will mark the ISA's 11th annual Diwali celebration. According to Kavathekar, Diwali, popularly known as the Festival of Lights, is an important festival for Hindus, Sikhs and Jains.

"The main concept behind the festival is the triumph of good over evil," she said.

Chris Haskett, professor of religious studies at USU, said the name Diwali derives from Sanskrit and refers to shining, lamps, light and other images of luminescence. The word roughly translates to "the festival of the lamped," Haskett said. This was inspired by the lighting of small clay lamps that are placed throughout the home, he said.

"For Hindus, Diwali celebrates the return of the Sultan Rama to his kingdom," said Palak Vasudeva, a master's student from Dehradun, India, studying environmental engineering. "The people in his kingdom were really happy he was coming back, so they lit up the whole town with little clay lanterns to light his path home, which is why it's called the festival of lights."

Haskett said Diwali is one day of a larger celebration that marks the end of the financial year for Hindus. He said it is a holiday about starting off fresh and making everything clean and new.

"It is new year, and the end of the fiscal year," Haskett said. "Businessmen in particular celebrate it. They put the old books away, and spend the night gambling. Then the next day, they open new books, and bless them to Shri and Ganesha, who are the lords of prosperity and overcoming obstacles."

Diwali is celebrated in India with prayer, Haskett said, by groups of family and friends.

"Most business owners will decorate with marigolds and strings of lights," he said. "People will also make a picture of a footprint outside their door which shows Luckshim, the goddess of prosperity, the way to come into the house to bless them for the coming year."

Celebrators kick off the festivities with a variety of traditional Indian foods, shared with family and friends.

"There are sweets distributed," Vasduvera said. "And there's good food at home, new clothes and special things like that."

Diwali is another holiday that involves lighting fireworks to light up the sky, he said.

"The first time I saw Diwali celebrated, I came home that night and there was a dank yellow fog hanging thick over Delhi from all of the fireworks," Haskett said.

"We have Indian food, dance, and a rock show by the Indian students, so it's basically just a fun evening for everyone," Vasudeva said. "They get together and see good performances and eat good food. And (visitors) also get to learn about Indian culture and why Diwali is celebrated.

"Students of every background should come," Vasudeva added. "You don't have to be Indian or know about Diwali to be part. It's also about learning."

The Diwali celebration is Oct. 22 at 6:30 p.m. Tickets cost $16 and include traditional Indian food and entertainment. The first 100 students who arrive will also receive a free Bollywood dance lesson. 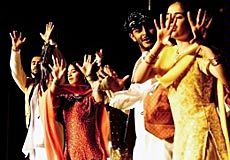 Dancers raise their palms in the Bhangra Dance at last year's Diwali Festival. The dance represents the state of Punjab, India, which brings its culture to USU. (Statesman file photo from the Utah Statesman Online)