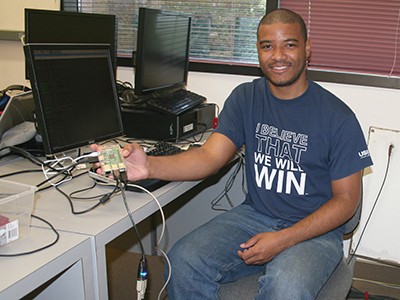 When intriguing opportunities arise, Utah State University scholar Jonh Mojica embraces them. With just one project standing between him and completion of his bachelor’s degree in physics with professional emphasis, the undergraduate jumped at the chance to work with Physics professor and department head Jan Sojka on a unique venture afforded by a relatively rare cosmic phenomenon: August 21’s total solar eclipse.

“We want to see what happens to very low frequency radio waves in the Earth’s ionosphere, when the moon completely blocks the Sun,” says Mojica, who is among the most recent cohort of students supported at USU by the government of the Dominican Republic.

The ionosphere, he explains, is made up of charged particles that absorb solar radiation and form a layer of protection between the Earth and the Sun. In a calm state, the region reflects radio waves, including very low frequency or “VLF” waves, back to Earth. But volatile space weather, caused by solar flares and other solar activity, can disrupt the waves.

“By monitoring and studying these waves, we can gain a better understanding of the ionosphere,” Mojica says. “And collecting data during the short time there’s no solar activity at all – that is, during an eclipse – gives us a whole new way to evaluate this region of the atmosphere.”

The undergrad researcher’s equipment budget is modest. Working with USU engineering technician Don Rice, Mojica is using recycled antennas on the roof of the university’s Science Engineering Research (SER) building to collect data transmitted to a computer floors below. The one new piece of equipment he added to the project is a Raspberry Pi, a credit card-sized computer he uses for remote access.

“The data Jonh collects will benefit researchers beyond just his project,” says Rice. “He’s collaborating with USU researchers at the Bear Lake Observatory and at the University of Colorado at Boulder.”

Mojica’s academic career at Utah State started with participation in USU Global Engagement’s English Immersion Program in the summer of 2012.

“It was one of the best experiences of my life,” says the native of Bajos de Haina, an industrial community along the Dominican Republic’s southern coast. “I met students from all over the world, tasted foods I’d never heard of and made great friends.”

From there, Mojica, a graduate of the D.R.’s Polytechnic Institute of Haina, began studies at USU Eastern.

“Price is a wonderful community and, coming from the Caribbean, its winters eased my eventual transition to Cache Valley,” he says. “I got involved with the SUN (Serving Utah Network) Volunteer Center, which introduced me to a lot of community activities.”

A pivotal experience, Mojica says, was a spring break service trip to the Navajo Nation, southeast of Price.

“Together, we built a home,” he says. “The climate and culture were different from anything I’d ever experienced. It was a great opportunity.”

A class he took with Sojka, after transferring to Logan, sealed the deal.

“I knew physics was what I wanted to do,” Mojica says.

Having served as a physics lab teaching assistant, the scholar plans to pursue doctoral studies and an academic career.

“I’ve always had a passion for teaching,” Mojica says. 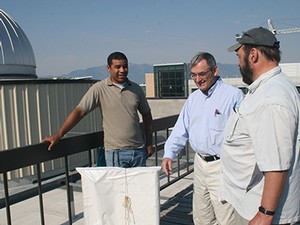 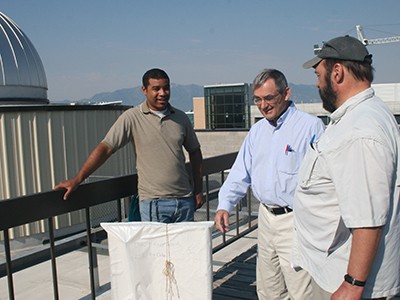