The late Memphis community leader Aaron Brenner said there are two classes of people: those who work toward the betterment of society and those who take the credit. "Try to belong to the first class," Brenner said. "It offers much more interesting company."
Biology Trustee Professor James A. "Jim" MacMahon belongs to the first class and his efforts were recently recognized at the Ecological Society of America's annual meeting in Montréal. MacMahon received the society's Distinguished Service Citation, which acknowledged his "long and distinguished service to the ESA, to the larger scientific community, and to the larger purpose of ecology in the public welfare."
"More than most ecologists, Jim spends a great deal of time and effort mentoring people, especially students," the citation read. "(He) is one of those rare people who makes a huge contribution almost anonymously, without apparent need of recognition."
MacMahon, who has served in a number of academic and administrative posts at Utah State, was named director of the university's Ecology Center July 1. Administered by the university's colleges of Agriculture, Natural Resources and Science, the center supports and coordinates ecological research and graduate education in ecology, while providing a central resource for decision makers considering actions that affect the environment.
By bringing a diverse group of disciplines together, the center provides a synergistic approach to a wide range of ecological issues, said MacMahon.
"The future of ecology requires more than just pure scientific input," he said. "It has so many implications for human beings."
Academics and professionals from all fields — biologists, social scientists, ethicists — ­ need to work together seamlessly, MacMahon said. "Our collective efforts strengthen us individually."
The center is currently involved in collaborative research projects with the university's Utah Water Research Laboratory and Water Initiative, as well as with other universities, foundations and government agencies, including the National Science Foundation, U.S. Department of Agriculture, U.S. Forest Service, National Park Service, Bureau of Land Management and more.
In addition to his new role, MacMahon continues to teach biology courses and supervise graduate students. Rounding out his endeavors is his involvement as chair of the science committee of the NSF-funded team working to form the National Ecological Observatory Network (NEON) and as organizer of the Intermountain Regional Observatory Network (IRON), one of the proposed NEON monitoring systems.
Once established, the network will allow scientists to tackle, from local to continental scales, important ecological questions confronting society.
"NEON is one of the biggest things to happen to ecology in the United States," said MacMahon. "Everything NEON is involved in will have an impact on the human race." 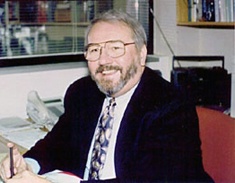