The Marie Eccles Caine Foundation, northern Utah's most visible charitable organization, is set to receive a gift of its own for once.
The foundation, which has supported dozens and dozens of causes in Utah, received the prestigious Foundation Spirit of Giving Award Thursday, Nov. 10, as part of Utah Philanthropy Day 2005 in Salt Lake City.
In the past decade alone, the foundation has supported more than $10 million in projects in the state, most of them in northern Utah.
"The Marie Eccles Caine Foundation is the preeminent foundation in northern Utah," said Utah State University President Stan Albrecht. "Each year the trustees of the foundation make significant investments in all manner of arts-related programs. Without a doubt, our state is a better place to live because of the foundation's generosity."
Albrecht said the list of USU programs supported by the foundation is long, including the music department, Utah Public Radio, the Merrill Library, the theatre department, Women's Center, the interior design department, the Nora Eccles Harrison Museum of Art and many, many more.
But, he added, the foundation's support is visible throughout northern Utah and the Wasatch Front. It includes school programs in Cache and Box Elder counties, the Brigham City Museum-Gallery, Cache Children's Choir and Cache Valley Center for the Arts, the Chamber Music Society of Logan and Musica Reservata. It supports the Stokes Nature Center, the Utah Festival Opera, the Caine Lyric Theatre, Sunshine Terrace, the Unicorn Theatre, Ballet West, KUED-TV, Ririe-Woodbury Dance Company, the Utah Symphony and Opera.
Albrecht said it would be a long list indeed if he were to detail all the many projects supported by the foundation and its trustees.
Tom Peterson, director of the Caine School of the Arts at USU, said it is difficult to exaggerate the importance of the Marie Eccles Caine Foundation in the lives of people in Utah.
"They define the field of giving in northern Utah," Peterson said. "The Utah arts scene - and the Cache Valley scene, in particular – would be dramatically different had this foundation not been so committed to bringing arts into this community. All of our lives are richer because of their gifts."
Peterson said the foundation underwrites dozens of internationally renowned visiting artists who come to USU. And the trustees of the foundation, both individually and as a foundation, have defined the arts topography of the area. Two members of the foundation recently made the largest private gift in the history of the university, a gift that will result in the new Manon Caine Russell Kathryn Caine Wanlass Performance Hall.
"This world-class performance hall is the physical cornerstone of our Caine School of the Arts," Peterson said. "And if the performance hall is the physical cornerstone, the heart of the school certainly comes from the many, many arts offerings supported by the foundation and its trustees that complement our excellent academic programs."
Peterson said all the foundation trustees deserve individual recognition: Kathryn Caine Wanlass, Manon Caine Russell, Dan C. Russell, George R. Wanlass, Marie Russell Shaw and Ralph B. Wanlass.
The award was formally presented at the Utah Philanthropy Day luncheon Thursday, Nov. 10, at the Little America Hotel in Salt Lake City. A crowd of nearly 900 was expected. The award is presented by the Utah Society of Fund Raisers in conjunction with the Utah Non Profits Association.
Contact: Tom Peterson, 435-797-1563
M. Scott Mietchen, 435-797-1158
Writer: Tim Vitale, 435-797-1356, tim.vitale@usu.edu 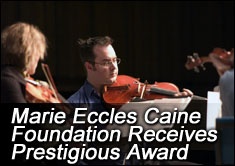 The Marie Eccles Caine Foundation supports numerous programs on the USU campus. Here, members of the Fry Street Quartet are seen in performance. 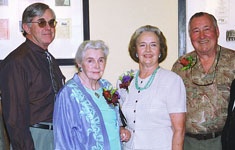 The Marie Eccles Caine Foundation played a major role in the expansion and updating project at the Lyric Theatre. The facility is now known as the Caine Lyric Theatre.