Professor Michael S. Sweeney was selected as this year’s recipient of the David Sloan Award for the Outstanding Faculty Paper presented at the American Journalism Historians Association international conference.
His paper, “Harvey O’Higgins and the Daily German Lie,” is the first historical work examining this particular World War I government propaganda campaign that targeted American newspapers. No other historian has read it or analyzed it. In fact, few Americans have even seen the columns on which his research centered since they were printed in 1918.
The David Sloan award is named for the founder of the American Journalism Historians Association. The winner is decided by “blind judging,” by a panel of reviewers rating a paper without knowing who wrote it. However, when Sweeney won the award while serving as the association’s president, the irony did not escape his colleagues and him.
“Some of my friends amusingly yelled ‘fix!’ when my name was announced,” he said.
Sweeney, department head of Journalism and Communication, knew he wanted to be a journalist when he was 14 and employed as a newspaper delivery boy. He pursued degrees in journalism and communication, and upon graduation held several positions at a number of newspapers. However, as soon as he began teaching classes at Tarrant County Junior College and Texas Christian University as an adjunct instructor, he knew teaching college was what he loved.
“Life is too short to be stuck in a job you hate,” said Sweeney. “You should get out of bed in the morning saying, ‘I can’t wait to go to work.’ I like newspaper work. I love teaching. Simple as that.”
Sweeney came to Utah State in 1996 after receiving his doctorate in communication at Ohio University. He said he appreciates the supportive atmosphere and the hardworking students at Utah State.
“This university values and supports good teaching, as well as important research,” said Sweeney. “My students are bright and eager, and they work their fannies off.” 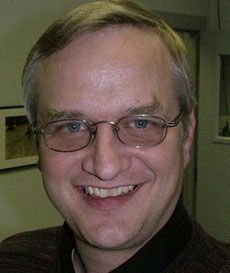