When Utah State University researcher Karin Kettenring tells relatives in her native New Jersey that she moved to the Intermountain West to teach and study wetland ecology, she receives incredulous stares and a few unsuppressed chuckles.

“’Utah?’ they ask – ‘Isn’t that a desert?’” says Kettenring, who joined USU’s Department of Watershed Sciences faculty in August 2008. “I have to explain that, yes, Utah has wetlands and they’re among the state’s most critical ecosystems.”

Wetlands are especially important in an arid region, she says, as they supply many of the basic needs of wildlife - food, water, a breeding ground and shelter from predators — in a surprisingly compact space.

Among Kettenring’s current research projects is the investigation of a prolific invasive plant known as Phragmites australis. The white-tasseled plant is often referred to as Phragmites (frag-MIGHT-ease) or “Common Reed,” though Kettenring classifies the pesky perennial, which is threatening native ecosystems, as a grass.
“When I first flew in to the Salt Lake International Airport and drove up to Logan, I noticed Phragmites all along Great Salt Lake,” she says. “I knew they had a stronghold back East but didn’t know they were so pervasive in this region.”

Prior to joining USU, Kettenring studied the plant extensively in the Chesapeake Bay area, where she served as a postdoctoral fellow for the Smithsonian Environmental Research Center. She’s continuing her study of Phragmites here in the West.
“With my students and colleagues, I’m investigating how this plant is spreading, why it is so successful and what the best ways are to control it,” she says. “Among the questions we’re asking is — has something changed about the environment that’s accelerating Phragmites’ growth?”
Kettenring says increased fertilizer and sediment runoff from farms, residential developments and industrial areas could explain Phragmites’ proliferation. Climate change may also be contributing to the plant’s spread.
Phragmites secretes gallic acid, which is toxic to native plants. Researchers at the University of Delaware recently announced findings that increased ultraviolet rays from the sun, a possible consequence of warming temperatures, degrades gallic acid and produces another toxin, mesoxalic acid, which also hinders the growth of native plants.
Aside from toxins, Kettenring says Phragmites crowds out native plants with its sheer physical size above and below ground.
“Phragmites can reproduce by seed or rhizomes,” she says. “Left alone, it can take over a large area in just a few years.”
Rhizomes are fleshy underground stems that grow horizontally to form extensive reed beds. Highly adaptable, Phragmites can form reed beds in a variety of soils and water types.
“Lateral shoots from Phragmites may grow as much as 16 feet per year,” Kettenring says. “And it grows stalks that rise 10 to 15 feet tall.”
Uncontrolled, Phragmites prevents the growth of native plants, including varied species of bulrush that provide critical food and nesting habitat for birds.
“Wildlife managers typically use herbicides such as glyphosate to control Phragmites,” Kettenring says. “Commercial applications of glyphosate are approved for use near wetlands but they’re not always effective. Among the things we’re investigating is when the best time is to spray herbicides and how much should be applied. We’re also investigating other methods of control, including flooding of wetland areas.”
Her current research is supported by start-up funds from USU, the university’s New Faculty Research Grant, the U.S. Fish and Wildlife Service, the Utah Wetlands Foundation and the Intermountain West Joint Venture. Kettenring is also the recipient of a 2009 Water@USU Research and Teaching Initiation Grant.
Related links:
Contact: Karin Kettenring, (435) 797-2546, karin.kettenring@usu.edu
Writer: Mary-Ann Muffoletto, (435) 797-3517, maryann.muffoletto@usu.edu 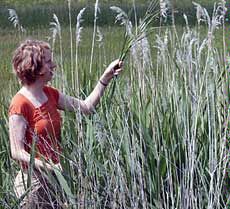 Karin Kettenring, assistant professor in the Department of Watershed Sciences, walks through an invasive grass called phragmites in a Logan, Utah wetlands area. 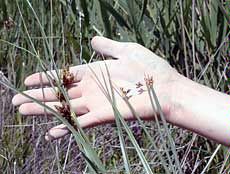