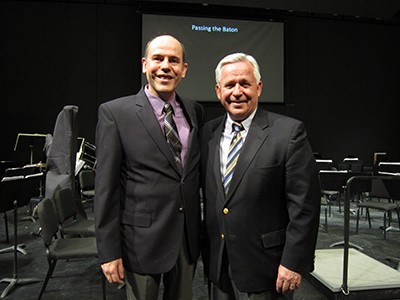 Director of Orchestral Studies in the Caine College of the Arts at Utah State University, Sergio Bernal, gave an inaugural lecture entitled “Passing the Baton,” where he was honored for his promotion to full professor. The lecture was held in the Morgan Theatre before the March 1 Symphony Orchestra Concerto Evening concert.

Bernal is a Latin American conductor, composer and teacher whose conducting activity has earned him international recognition as a “tasteful technician with a more than technical gift for connecting with a score’s essence.”

Bernal’s guest engagements include appearances with the Simón Bolívar Orchestra of Venezuela, the Orquesta Sinfónica Municipal de Caracas; the National Symphony Orchestra and the National Opera of México;, the Orquesta Filarmónica de Montevideo; the National Symphony Orchestra of Colombia; the Bogotá Philharmonic; the Torun Chamber Orchestra and Szczecin Opera of Poland; the W.A. Mozart Philharmonic of Rumania; the Eugene and New Mexico Symphonies and the Indianapolis Chamber Orchestra. He conducted the 2012, 2014 and 2015 international Via dei Concerti festival orchestra and choir in concert tours throughout Italy, France and Spain. A strong believer in the power of music as a catalyst for social change, Bernal spent a decade working at El Sistema in Venezuela, the country’s groundbreaking system of youth orchestras.

Since his arrival at USU, Bernal has taken the USU Symphony to new levels of achievement. His innovative programming has attracted national attention in projects such as the fully staged 2010 production of Shakespeare/Mendelssohn’s A Midsummer Night’s Dream with Utah State Theatre, which has since been emulated by other theater companies and symphony orchestras using Bernal’s performance edition.

As a composer, Bernal explores the popular and folk idioms from Ibero America and likes to do so in works for soloist and orchestras. His two concerti are written for prominent Venezuelan soloists and have received performances in the United States and Venezuela. Arcano is dedicated to classical and folk violinist Eddy Marcano and Andares, a trumpet concerto dedicated to the 2006 Maurice André Competition winner Francisco “Pacho” Flores.

A native Colombian, Bernal studied on a full scholarship and stipend with Lorin Maazel, Günther Herbig, Erich Leinsdorf and Eleazar De Carvalho in the Yale University/Affiliate Artists Conducting Program. He holds conducting degrees from Yale University and the University of Michigan (where he studied with Gustav Meier), and a doctorate in composition from the University of Utah. He received additional conducting training at the Aspen Music Festival and the Tanglewood Music Center. In 1986 he apprenticed with the late maestro Eduardo Mata at the Dallas Symphony and worked as Mata’s assistant in recording projects of the Ibero American symphonic repertoire.

Bernal makes his home in Cache Valley with his wife, Marina, and his daughter, Gabriela. 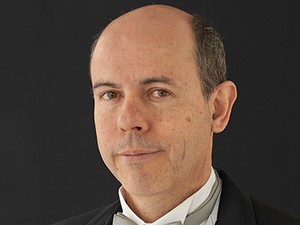 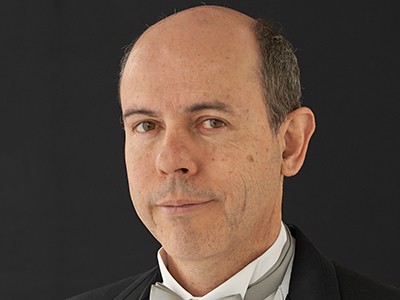