Wildlife-vehicle collisions, deer devouring crops and vegetation, worries of disease transmission between wildlife and livestock: they’re headaches discussed ‘round the world.
Wildlife biologists Peter Watson and Rory Putman were right at home as they talked about these topics with students and faculty at Utah State University — even though each scientist was nearly 5,000 miles away from his actual home.
Watson and Putman, both of the United Kingdom, visited Utah State during October as guests of the USU-based Berryman Institute for Wildlife Damage Management.
Watson is director of The Deer Initiative, a 15-year-old partnership funded by government entities, non-profit conservation agencies and private landowners focused on sustainable, cooperative management of wild deer populations in England and Wales. Putman, a professor of environmental biology at Manchester Metropolitan University, serves in a similar role as a wildlife management consultant in Scotland.
“This is a valuable opportunity to discuss the challenges of human-wildlife interactions,” Watson said. “We’re involved in so much parallel work despite that stretch of water between us.”
But that’s where many of the similarities end. The countries of the British Isles don’t follow the North American Wildlife Conservation Model, which is based on the principles that wildlife belong to all citizens and its management and related research are funded by users, through such means as hunting and fishing licenses and park fees.
“In our case, the deer are owned by no one and much of the wildlife live on private property,” Putman said. “Landowners have the legal right to make their own decisions about how landscapes and wild animals are managed on their property.”
And that’s where conflicts can begin.
“Often there’s a lack of awareness that decisions made by one landowner can negatively impact adjacent landowners and the public,” Watson said. “Unmanaged, deer can cause problems in neighboring areas, including wandering into busy roadways, mingling with livestock or eating neighboring crops.”
The challenge, Watson and Putman said, is getting neighbors to cooperate on management solutions. Convincing landowners to consider new options after years of entrenched practice requires awareness-building, education and persistence.
“You have to foster a culture of ‘We’re all in this together,’” Putman said. “Landowners learn that they can fulfill their goals in a different way and in a way that benefits the entire community.”
Deer’s natural predators in the British Isles were wiped out by 1750. As in the United States, reintroduction of wolves is a controversial topic in the U.K. At the same time, interest in hunting is dwindling.
“In the U.K., United States and Europe, most hunters tend to be older, white men,” Putman said.
“With no natural predators and less hunting, deer populations are growing. How we’ll deal with these populations, coupled with increasing human populations and development, is a key question.”
USU professor Terry Messmer, who coordinated the U.K. scientists’ visit, said having an international exchange of ideas is a valuable experience.
“Even with the Internet, there’s no substitute for face-to-face discussions,” Messmer said.
Related links:
Contact: Terry Messmer, 435-797-3975, terry.messmer@usu.edu
Writer: Mary-Ann Muffoletto, 435-797-3517, maryann.muffoletto@usu.edu

Rory Putman, left, and Peter Watson, right, both visiting scientists from the United Kingdom, meet with USU professor Terry Messmer, center. The visitors were on campus to exchange information about human-wildlife conflicts. 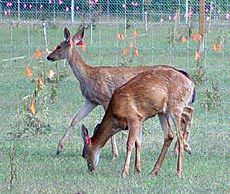 Managing deer populations in human-inhabited landscapes is a challenge throughout the world. USU wildlife biologists are collaborating with researchers from varied countries to discuss varied management models and solutions. Photo courtesy USDA.