This time last year, Utah State University undergraduate Dani Babbel was marveling at the growth of her Facebook page “Save Higher Ed in Utah” and heading to Utah’s Capitol Hill with students from around the state to protest budget cuts.
This year, the aspiring physician returns to the Capitol rotunda with a slightly different mission. Babbel is among 31 USU undergraduate researchers joining peers from the U. to present their efforts to legislators at the Jan. 28 Undergraduate Research Day on Capitol Hill.
“Being inside the Capitol building is so empowering, and I’m excited to meet with legislators again,” says the Oregon native who is a Quinney Scholar in the College of Natural Resources. “I look forward to speaking with them face-to-face about issues I’m passionate about.”
With faculty mentor Claudia Radel, Babbel has spent the past year investigating the impact of language barriers among limited English-speaking patients at Utah’s Logan Regional Hospital.
“I became interested in this topic because of my com­bined interest in Latin America and medicine, as well as my experience as a Spanish interpreter at the hospital,” she says. “I want to know if language is perceived as a barrier to obtaining medical ser­vices as a response to illness or for routine care.”
An Honors student, Babbel has received a number of academic scholarships and was named a Governor’s Scholar in 2006 and, in 2007, received an honorable mention from the Udall Foundation. During her undergrad years, she has undertaken research and study in Mexico, Peru and varied countries in Africa and Europe. She plans to pursue an international career in medicine.
While Babbel will be carrying a research poster rather than a protest sign to Salt Lake City, she hopes that she and her peers’ presence at the capitol will remind legislators of the importance of higher education.
“It’s refreshing to see politicians who are interested in the affairs of our generation,” she says. “Though I’ll probably refrain from bringing up topics that are too political, I think we still should be urging our representatives to make educational funding a high priority.”
With legislators, USU students will share research on timely topics ranging from biofuel production, soil remediation following wildfire disturbances, obesity and math education to cloning and the impact of climate change on endangered species.
Erin Fleming, a fisheries and aquatic sciences major and also a Quinney Scholar, will discuss her research on brine shrimp in Great Salt Lake and their role in transferring mercury to waterfowl.
“Growing up in Utah, I learned to despise the lake and thought it was a dead, worthless lagoon,” says the 2008 graduate of Provo’s Timpview High School. “I’ve learned that this is very much not true. There is lots to be learned about this unique and priceless — that’s right, I said priceless — ecosystem.”
Biochemistry major Ben Brown will present his research on varied subtypes of influenza viruses.
“This project was exciting as it was completed during the time that swine flu was emerging,” says the 2005 graduate of Utah’s Woods Cross High School. “Hopefully, this research will lead to better ways of identifying drug-resistant influenza virus strains.”
Related link:
Research on Capitol Hill
Contact: Joyce Kinkead, 435-797-1706, joyce.kinkead@usu.edu
Writer: Mary-Ann Muffoletto, 435-797-3517, maryann.muffoletto@usu.edu 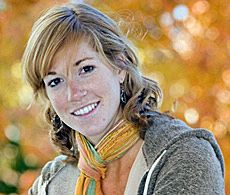 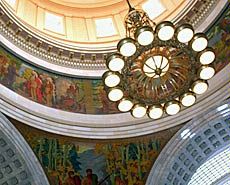 During the 35th anniversary of USU's undergraduate research program, 31 Aggie students will meet with legislators in Salt Lake City to share their research on such topics as biofuels, obesity and climate change.