President Stan Albrecht and First Lady Joyce Albrecht hosted an Inaugural Professor presentation by Richard Cutler at the President's Home. Cutler, a faculty member in the Department of Mathematics and Statistics, was honored for his promotion to full professor and was featured in the Inaugural Professor Lecture Series.

Russell Thompson, head of the Mathematics and Statistics Department, introduced Cutler as a professor at Utah State whose career spans the development of the modern era of statistics.

As a teacher Cutler was twice recognized as the department teacher of the year— his teaching evaluations are typically at the top of the department, said Thompson.

“In the area of service to the department and university, Richard has played a major role in the development of a statistics program that is certainly the best in the state of Utah and is comparable to programs in the Intermountain area,” Thompson said.

Cutler has longstanding collaboration with faculty in the Colleges of Business and Natural Resources, the Center for Epidemiologic Studies and with federal researchers and various agencies.

“I went from being a pure mathematician to an applied statistician,” Cutler said. “Most of my research is interdisciplinary in nature.”

Cutler has taught statistics classes at Utah State for 17 years. Most recently he has been teaching classes in experimental design and regression methods at a graduate level. 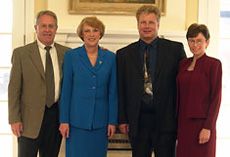