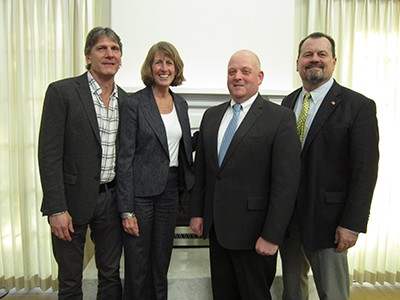 When Brian Warnick was a college student and told his mother he had decided to channel his love of life science into becoming a school teacher, she cried. But experiences with some outstanding teachers in Warnick’s life convinced him that teaching was the career path for him, despite his mother’s concerns about the numerous challenges and relatively small salary.

Warnick, professor in Utah State University’s School of Applied Sciences, Technology and Education (ASTE) and associate dean of the College of Agriculture and Applied Sciences, told colleagues, friends and family gathered for his inaugural professor lecture that great teachers are the reason “a kid from Lyman, Wyoming” is now a professor. Great teachers are the reason Warnick tries to make a positive difference in the lives of middle and high school students by preparing their future teachers. They are the reason Warnick is a teacher by choice, not by chance.

The first teacher to influence Warnick’s career path was someone he never met: his great-grandfather Adolphus Peter Warnick, a Swiss immigrant who valued education and loved agriculture. After attending the Utah Agricultural College and University of Utah, Warnick’s ancestor taught high school vocational education and was a high school principal.

Warnick described a rocking chair that was in his family home when he was a boy, rather roughly made and not a conventionally beautiful piece of furniture. But the chair was a reminder of the caring and passionate teacher his great-grandfather had been because it was given to him
as a gift from a student.

Warnick told of the important influences of his grandparents and parents, who were all involved in agriculture, and of several teachers and colleagues. First among them was Windsor Copley, Warnick’s seventh and eighth grade science teacher. Copley taught with inquiry methods that were unusual at the time. In seventh grade, Copley gave Warnick a soil testing kit and inspired him to do a science fair project about soils. So Warnick’s mother drove him to take samples in the Uintas, at the top of the watershed, all the way down to hay fields and other locations in the valley. Warnick earned a spot at the Wyoming State Science Fair that year and got to take his project to Casper College.

“That’s where the wheels really started turning in my head about what I could potentially do with my life,” Warnick said.

His high school English teacher, Relta Cox – a.k.a. the toughest teacher in school – pushed her students to read and write volumes, and always wrote back with careful corrections and comments. When Warnick took an English class at USU, the professor insisted he should be an English major. When Warnick was not persuaded to change his major, the professor advised him to thank his high school English teacher. The next time he went home to Wyoming, Warnick did just that, and found she was packing to move. He has always been grateful that he took time to thank her for the profound difference she had made in his life, especially because she died in an accident shortly after that visit.

Warnick’s assignments to those gathered for his lecture were to send an influential teacher a thank-you note and to always look for ways to make a positive difference in people’s lives, especially in students’ lives.

He recalled USU faculty members who helped shape his approach to teaching, including long-time biology professor Ivan Palmblad, who was well known for learning students’ names, even in introductory courses with 200-plus students.

“My freshman year I used to try to sit behind a pillar in the BNR auditorium so he wouldn’t call on me,” Warnick said. “I went on a mission, was back in school for about a year and then had an evolutionary biology class from Dr. Palmblad. The first day I walked into class he greeted me with ‘Hi, Brian.’ He was remarkable. Knowing your students is powerful.”

He credited Gary Straquadine, who currently serves as vice chancellor at USU Eastern and is a former ASTE department head, for helping him transition from teaching high school life sciences to agriculture and then to a career in higher education. He said he learned a lot about compassion from Straquadine, a trait he believes is a key element of effective teaching and leadership.

Warnick also noted current ASTE Department Head Bruce Miller’s knack for giving people the tools and resources to do their jobs “and then getting out of their way, although he is always there in the background cheering them on.”

Warnick credited many of the principles that guide his teaching to William “Buddy” Diemler, former Utah Office of Education agriculture education specialist. Among Deimler’s frequent sayings was “Every student. Every class. Every day.”

Explaining that statement’s impact, Warnick said, “It is my goal is to engage every student, in every class I teach, every day.”