Amit Peled, acclaimed as a musician of profound artistry and charismatic stage presence, is featured in a special concert presentation at Utah State University provided by the Wassermann Festival.

First is a master class, presented by the cellist Thursday, Feb. 28, from 7-9 p.m. at USU’s Performance Hall. Peled will work with students from the USU Music Department. The master class is open to the public and admission is free for those holding a concert ticket. More information about the master class, the concert and USU’s Wassermann Festival is available online.

Peled is featured Friday, March 1, 7:30 p.m., in a recital titled “Cellobration” at the USU Performance Hall.

“Amit Peled exhibits qualities that rank him with the premier performing artists of his generation, and it’s quite a treat to have him perform in Logan,” said Wassermann Festival Director Dennis Hirst.

Peled is acclaimed as one of the most exciting instrumentalists on the concert stage today.

According to a New York Times review, his performance possesses a “glowing tone, a seductive timbre and an emotionally pointed approach to phrasing that made you want to hear him again.”

The Washington Postsaid “Peled is a larger-than-life figure on stage,” and the Baltimore Sun praised his “simply gorgeous sound.”

“I first became acquainted with Mr. Peled during my tenure as associate director of the Heifetz International Music Institute,” Hirst said. “Amit Peled was a perennial favorite at the faculty concerts, and audience members from many walks of life identified with his captivating performances and genuine interpretations of a variety of repertoire.”

In a rare gesture that commends Peled’s impressive talent, the musician recently received Pablo Casals’ 1733 Goffriller cello, a presentation from Casals’ widow, Marta Casals Istomin, and the Casals Foundation. Casals is regarded as one of the greatest cellists of all time, best known for his recordings of the Johann Sebastian Bach cello suits and for revolutionizing bowing technique.

“Having heard Mr. Peled perform numerous times, and observing firsthand his incomparable musicianship and artistry on the cello, I am not surprised that he was the chosen recipient of the late master’s instrument,” said Hirst.

“The last time I heard Mr. Peled perform, it was on the stage of an old clapboard New England church — converted by a high school into a small performance hall — and the acoustics were adequate, but the playing was unforgettable,” Hirst said. “I am really looking forward to hearing Mr. Peled perform in the world-class Performance Hall at Utah State University. I know it will be a not-to-be-missed experience.”

Tickets for Cellobration are $24 for adults, $20 for USU faculty/staff and seniors and $5 for students age 8 and older. Tickets are available at the Caine College of the Arts Box Office in the Chase Fine Arts Center, Room 139-B, by calling the box office, (435) 797-8022 or online through the college's Production Services website. Tickets are also available at the door.

The Amit Peled recital is a special 2013 offering of the Wassermann Festival which returns in 2014 with a full slate of piano recitals and classes. 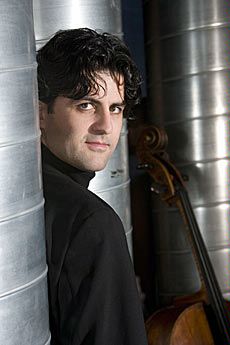