As with many areas of the former Soviet Union, most people will probably need Google to find it and help to spell it; Azerbaijan. Flanked by the Caspian Sea, Armenia, Georgia and Iran, Azerbaijan is both oil rich and agriculturally poor.

“There is no reason they couldn’t produce more food since they have nine of 11 climate zones and were once considered the bread basket of the former Soviet Union,” Young said. “They have a mild climate compared to other parts of Europe and have the potential to grow more dairy forages.”

Rood said they are also evaluating the dairy herd genetics.

“There are several indigenous breeds of dairy cows that seem to be hearty,” he said. “What has failed was bringing in pure genetics of Holstein and Jersey cattle.”

Though Baku is cosmopolitan and promoting itself as a tourist destination on the Caspian Sea, other parts of the country lack the infrastructure for a modern agricultural system, for instance many of the dairies still milk by hand, Young said.  Most of their milk is processed into cheese and yogurt because they don’t have an efficient system for distributing and storing fluid milk.

Young and Rood have each made three trips to Azerbaijan and the city of Ganja where the equivalent of a U.S. land-grant university is located.

“Most of the faculty are in their 60s and were educated in the former Soviet Union,” Young said. “They haven’t produced new faculty yet to take their places when they retire. Over the last couple years, we’ve seen students learn more about dairy nutrition and health. In the future there will be more opportunities for change. “

Rood said it has been a rewarding program making a difference in a country where in a generation from now, they will have a self-sufficient dairy industry. Both Young and Rood believe the next step is bringing students from Azerbaijan to study at Utah State University.

“Whereas language is an issue for us working with their current faculty, younger students are quicker to learn a second language,” Young said. 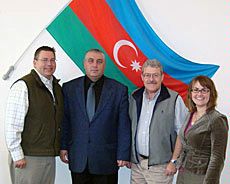 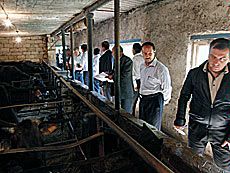