It’s not a long walk across the Utah State University campus from the Utah Climate Center to the Chase Fine Arts Center. In terms of academic disciplines though, it seems like a long way from physics research to chamber music. Yet, the result of collaboration between physicist Robert Davies and members of the Fry Street Quartet was recently on stage at a music festival in Brazil. A local audience has the opportunity to see a performance April 6 at 11:30 a.m. in the USU Performance Hall.

The project’s title, Crossroads, reflects the message that the musicians and scientist hope to convey: that humans are at a crossroads in deciding how we will live and how Earth’s resources will, or will not, sustain us. The performance brought together Davies’ brief lecture on climate and sustainability and a silent show of photographs that juxtapose beautiful images of the Earth and people with illustrations of landscapes and people damaged by the way many of us live. The Fry Street Quartet — Rebecca McFaul, Bradley Otteson, Anne Francis Bayless, and, for the performance in Brazil, guest artist Felicia Moye — followed with a performance of a string quartet by Dmitri Shostakovich that served as a musical meditation. For the April performance in Logan, the Fry Street Quartet is joined by its new first violinist Robert Waters.

Davies said communicating climate science to many different groups prompted him to learn more about how people form and act on their beliefs, and showed him that understanding something intellectually doesn’t mean people will change behavior. Humans are best at taking action when they have a more emotional reaction to information.

“We’re not well developed to deal with risk that we think is far in the future or that mostly affects other people and other places,” Davies said. “Understanding Earth’s climate is mind boggling and we could not understand it without every bit of science we know. But what we learn runs up against our ability to address risk, and taking action requires moving from an intellectual to a visceral understanding.”

Davies felt an urgency to find a new way to “discuss” sustainability issues that could give people a more emotionally connected level of understanding because the problems are growing and changing so quickly. He has attended many concerts over the years, many of them by the Fry Street Quartet — USU’s award-winning professional quartet in residence — and found that music often led him to think of things in new ways.

In this case, music led Davies to think of a way that might make people feel differently about climate science and the way they live. And though he is passionate about his profession, Crossroads became a passion project apart from his research and teaching.

In the concluding section of the performance, members of the quartet — with narration and pantomime — served as metaphor for the limitations of individual achievement and the power of collaboration. The musicians demonstrated the ways they began learning their instruments and developed into mature and skilled players, and how they create beautiful music only when they blend their efforts and are aware of the parts played by others in the group.

“The point we try to convey is that we don’t really have to live very differently, but we must change the ways we produce the goods and services we use,” Davies said. “We are mostly too removed from how the ‘machine’ works that produces our lives and how we get the things we use. We’re feeding that machine with our environment, biodiversity, our health and other people’s lives. It’s not a utopian vision. There is a lot of research and many good examples of how to do it.”

Davies said his main message is not about changing one’s lifestyle, it’s really about preserving it, “because we can’t sustain this lifestyle, in the way we produce it now, for more than another couple of generations.”

The Fry Street Quartet has been Quartet in Residence, performing and teaching at the prestigious Oficina de Musica in Curitiba, Brazil, for the past three years. In 2011, the quartet was already collaborating with Davies to create Crossroads and discussed a possible performance of the piece with the festival’s director. It seemed a natural fit because Curitiba is considered internationally to be a model of sustainable urban development, and the festival itself is striving to be carbon neutral.

“Then they told me about their work, some of their programs and goals and I was blown away,” Davies said. “The city of Curitiba has done urban planning since the 1940s with mass transit at its core, urban forestry and green space preservation. The state is working to create large solid forested areas to provide enough good-quality habitat for plants and animals with land swaps that keep commercial development in centralized areas. The government does not dictate, but facilitates the land swaps and sales.”

As a result of the scientific exchange, Utah Climate Center scientists will be working with the department in Parana to analyze data critical to the Brazilian’s continued planning and coping with projected climate change.

Davies said Crossroads does not push any particular policy, just presents the science in a way the performance’s creators hope will prompt people to act on it. He said some people have criticized the project for “playing the emotion card,” but Davies said the project is not aimed at fear mongering.

“The science sells itself, but we need people to internalize it,” Davies said. “People are very protective of their important relationships and behaviors and you don’t overcome that barrier with science alone.”

Faculty, staff, students and members of the community at large are invited to the April 6 presentation of Crossroads at the USU Performance Hall. The presentation begins at 11:30 a.m. Tickets are free and will be distributed on a first-come, first-served basis that day.

The performance of Crossroads concludes activities during USU’s Research Week, a celebration of discovery, scholarship and creative activity. Now in its eighth year, Research Week highlights Utah State’s best faculty, graduate and undergraduate researchers. A listing of the week’s events is online.

While in Brazil, USU's Robert Davies presented a brief lecture on climate and sustainability, translated by Brazilian Marja Lawan Almeida Braga, followed by a silent showing of photographs. The Fry Street Quartet presented a musical meditation. 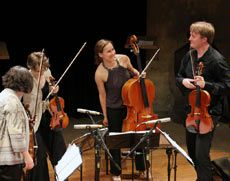 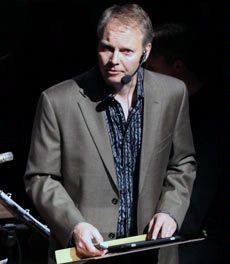