In 2007, we celebrated the golden anniversary of mankind’s first small steps into outer space, with the surprise launches of Sputnik I and II in late 1957 by the Soviet Union. After a rocky start, the U.S. entered the race in early 1958 with successful launches of Explorer I and Vanguard I, and later pulled away to place human beings on the moon and explore our entire solar system.
It is interesting to remember that at the time of the Sputnik launches, engineers and scientists from Northern Utah had already been probing the earth’s upper atmosphere for the previous 10 years. In 1947, the Upper Air Research Laboratory of the University of Utah in Salt Lake City was building research instruments for launch into the fringes of space aboard captured German V-2 rockets at the White Sands Missile Range in New Mexico. That laboratory was gradually transferred to Utah State University in Logan, starting in 1957, to become the Space Dynamics Laboratory, which is still deeply involved in the space program five decades later.
Furthermore, a few weeks after the first Sputnik started beeping its way around the world, the first buildings of Thiokol Chemical Corporation’s Wasatch Division were dedicated near the Golden Spike Site at Promontory, Utah, and five years later the doors of Thiokol’s Astro-Met Division opened at the Ogden airport.
From those humble beginnings, these organizations have employed tens of thousands of Utahns and contributed tens of billions of dollars to the Utah economy, while participating in a staggering variety of space and national defense activities.
Just stop and think for a minute — on every continent, in every ocean and in all the skies around the globe, there are space and defense program products that were designed and built by some of your neighbors in the Top of Utah. And in the farthest reaches of the solar system, Thiokol rocket motors are still flying outward, to Pluto and beyond.
Today, merged with Hercules Powder Company, Thiokol’s sometimes competitor and sometimes partner to the south, these Utahns forge ahead under the banner of Alliant Techsystems, Inc., better known as ATK. The entire first stage and escape system motor for the Ares I launch vehicle, which will replace the space shuttle in the next decade, are under development by the people of ATK right now, just up the road in the facilities that Dr. Harold W. Ritchey, the visionary president of Thiokol and longtime Ogden resident, started 50 years ago.
Earlier this summer, some of the original Thiokol team got together in Brigham City and Ogden to share their memories of the past five decades, and to wish that our wonderful friend and boss, Hal Ritchey, could have been there with us. The next time you see any of these Thiokol, Hercules or Space Dynamics Laboratory folks, or their children and grandchildren who work for the same organizations today, how about giving them a handshake and a word of thanks for the role they’ve played in one of our nation’s finest achievements.
This guest commentary, written by Gil Moore, appeared in Ogden's Standard-Examiner Sunday, Oct. 7, 2007.
R. Gilbert “Gil” Moore is a space scientist and former physics professor who has taught at Utah State University and the United States Air Force Academy. In 1976, he personally funded the first Get Away Special (GAS) payload reservation for students at USU and other area campuses, which initiated Utah State’s famous GAS program. Since USU’s first GAS experiment flew on the Space Shuttle Columbia in 1982, Utah State has sent more student-built experiments into space than any other university in the world.
Moore lives in Monument, Colo.
Related links:
USU Space Dynamics Laboratory
USU Scholars Honor Sputnik’s Legacy 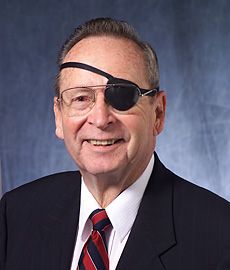