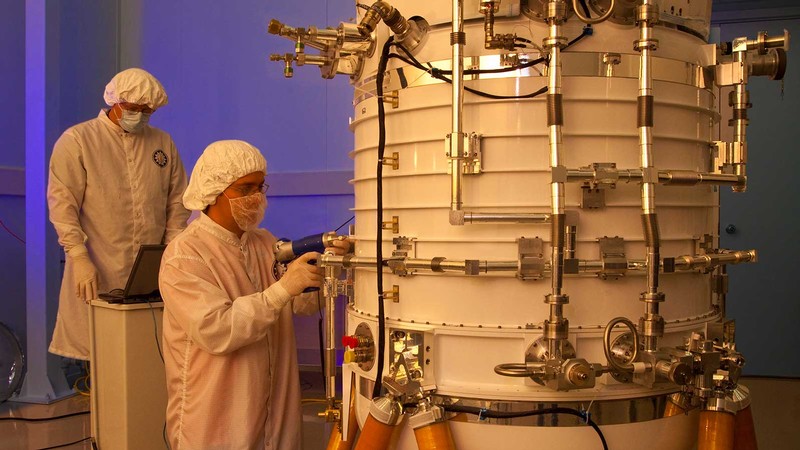 This image of the WISE telescope shows engineers from the Space Dynamics Laboratory working on the telescope at SDL facilities in North Logan, Utah, in 2009. SDL and NASA celebrate the tenth anniversary of the successful launch of the spacecraft this week. (Credit: SDL/USU-Donna Barry) 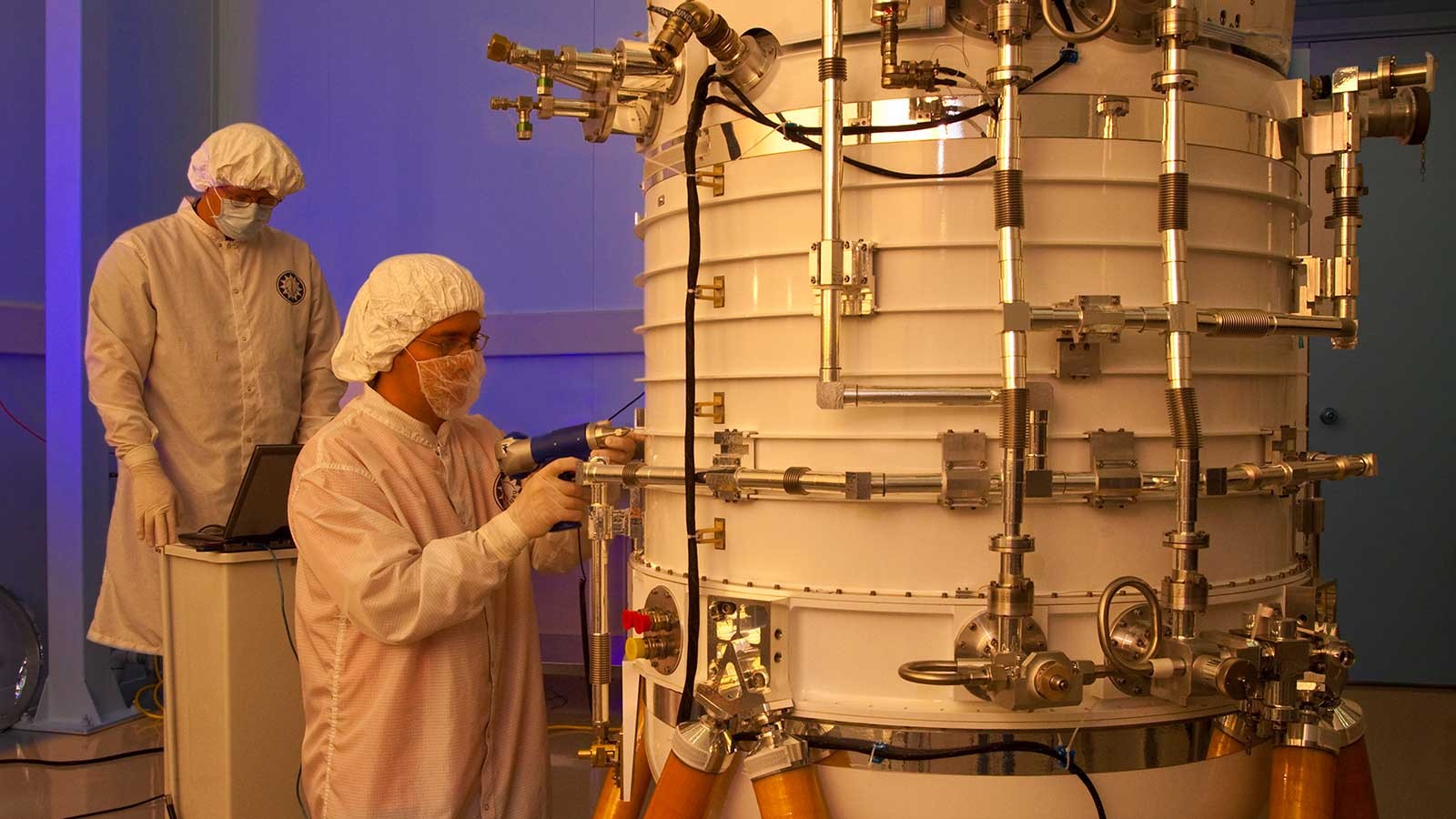 Thor’s Helmet, Omega, Pleiades. These names evoke wonder, inspire awe and represent just three of the three-quarters of a billion objects WISE took pictures of on its orbital journey above the Earth. During its 13-month long original mission, the telescope scanned the entire sky in infrared light and sent back 2.6 million images, including remote galaxies, stars, nebulae and asteroids. For years to come, generations of scientists will benefit from the treasure trove of WISE photos to better understand the universe and our place in it.

“WISE was one of those unique history-making missions that relatively few people have the honor to be a part of,” said H. Scott Hinton, president of SDL. “For decades, NASA and SDL have worked together to help reveal the unknown for the benefit of humankind. The nine hundred dedicated engineers, technicians, scientists, and business professionals of SDL remain grateful to engage in NASA’s advances in science, technology and space exploration.”

SDL designed WISE to detect heat given off by objects in space ranging in temperature from minus 330 degrees Fahrenheit to 1,300 degrees Fahrenheit. Because WISE was designed to look for objects cooler than human eyes can observe, the telescope was built to detect infrared light. The mission also required that the telescope remain cooler than the objects it was photographing—an engineering challenge of galactic proportion.

“In order for WISE not to be blinded by its own heat signature, we constructed a thermos-like structure called a cryostat. The telescope was placed in the middle of the cryostat, and solid hydrogen surrounded the telescope, cooling it to minus 440 degrees Fahrenheit,” said Pedro Sevilla, SDL’s mission operations lead and NEOWISE program manager. “Within about ten months, the solid hydrogen that cooled the telescope sublimated off into space, slowly warming up the telescope and ending its original mission in January 2011.”

Some important discoveries made by WISE include uncovering millions of hidden black holes; discovering hundreds of brown dwarfs—the coldest class of stars; discovering previously unknown comets and asteroids; helping to largely rule out the theory of a “Planet X” orbiting in the far reaches of our solar system; and discovering the most luminous galaxy in the universe, shining with the light of more than 300 trillion suns.

Following its initial mission success, the spacecraft was put into on-orbit hibernation in February 2011. But, the WISE story doesn’t end there.

In September 2013, NASA woke up the sleeping spacecraft to assist NASA’s efforts to identify and characterize the population of near-Earth objects. With two of its original four infrared cameras still working, NASA renamed the mission NEOWISE, and it began hunting the universe for comets and asteroids that pass within 28 million miles of Earth’s orbit. To date, WISE and NEOWISE have discovered over 35,000 asteroids and 28 comets. 291 of the found objects are considered near-Earth objects, of these, 52 are classified as potentially hazardous asteroids.

Three asteroids discovered by WISE, 246861-Johnelwell, 243516-Marklarsen, and 249539-Pedrosevilla, were named in honor of SDL employees who made significant contributions to the WISE program. 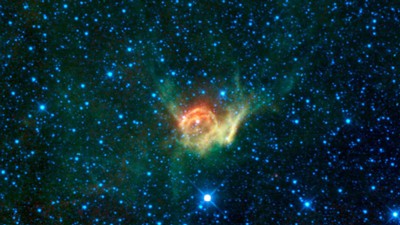 This heroic image from the SDL-built WISE telescope is of a special cloud of dust and gas in the constellation Canis Major cataloged as NGC 2359. The nebula is more commonly known as Thor's Helmet due to its remarkable resemblance to depictions of the headwear donned by the famed Norse god of thunder and lightning. This image covers an area of sky about 2.5 times the size of the full Moon. (Credit: NASA/JPL-Caltech/WISE Team) 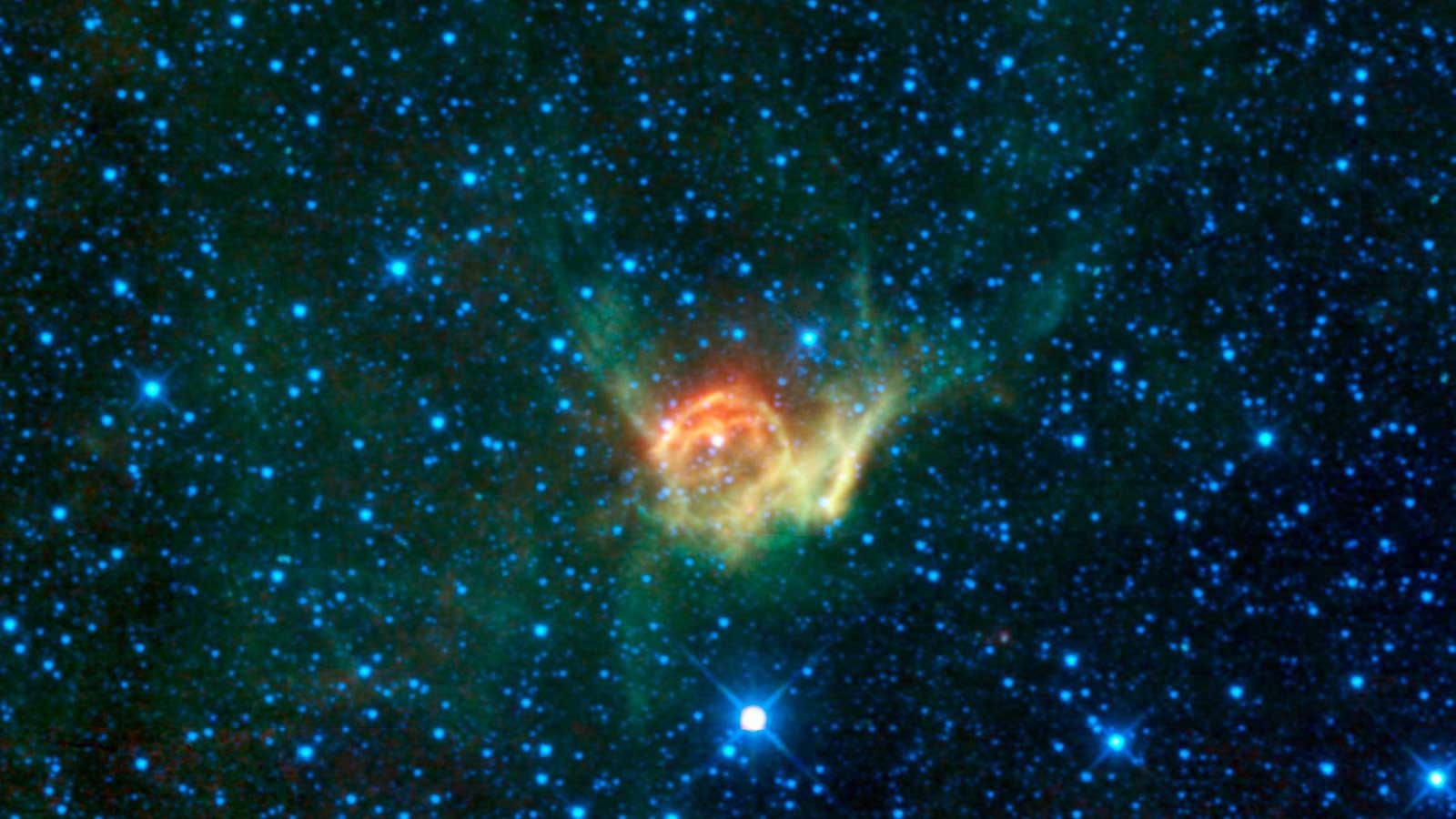 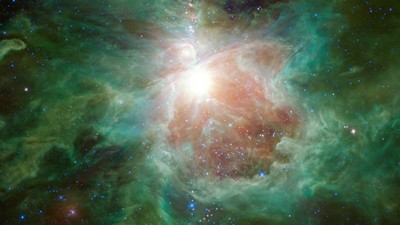 The Great Nebula in Orion is featured in this sweeping image from the SDL-built WISE telescope, built by the Space Dynamics Laboratory. The Orion Nebula (also cataloged as Messier 42) is located in the sword of Orion, hanging from his famous belt of three stars. The star cluster embedded in the nebula is visible to the unaided human eye as a single star, with some fuzziness apparent to the most keen-eyed observers. (Credit: NASA/JPL-Caltech/WISE Team) 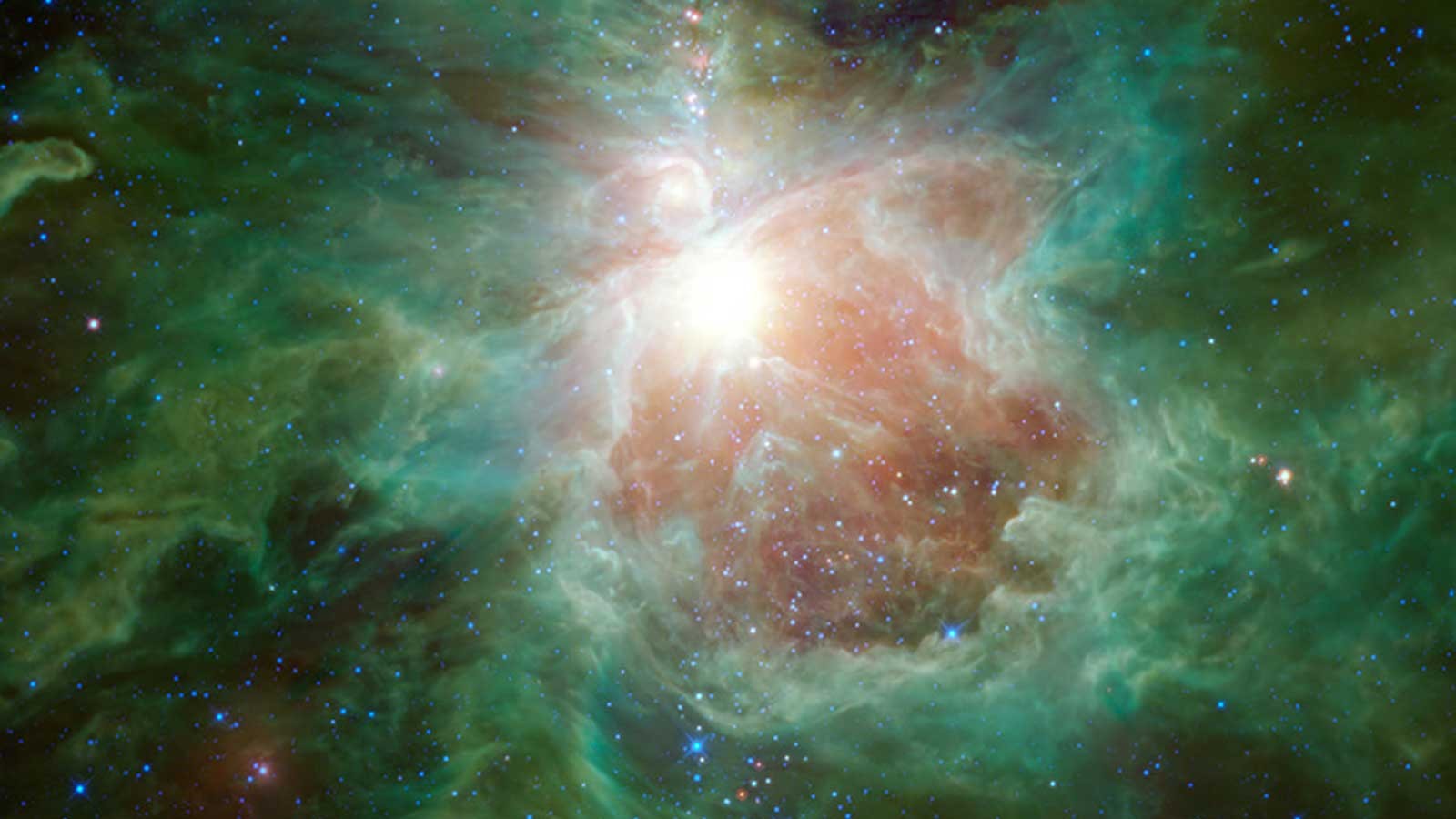 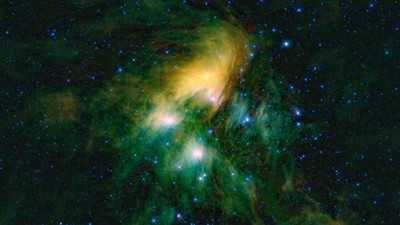 This image shows the famous Pleiades cluster of stars, as seen through the eyes of the SDL-built WISE telescope. The cluster is prominent in the sky during winter months in the constellation Taurus, when viewed from the Northern Hemisphere. In this infrared view of the Pleiades from WISE, the cluster is seen surrounded by an immense cloud of dust. (Credit: NASA/JPL-Caltech/WISE Team) 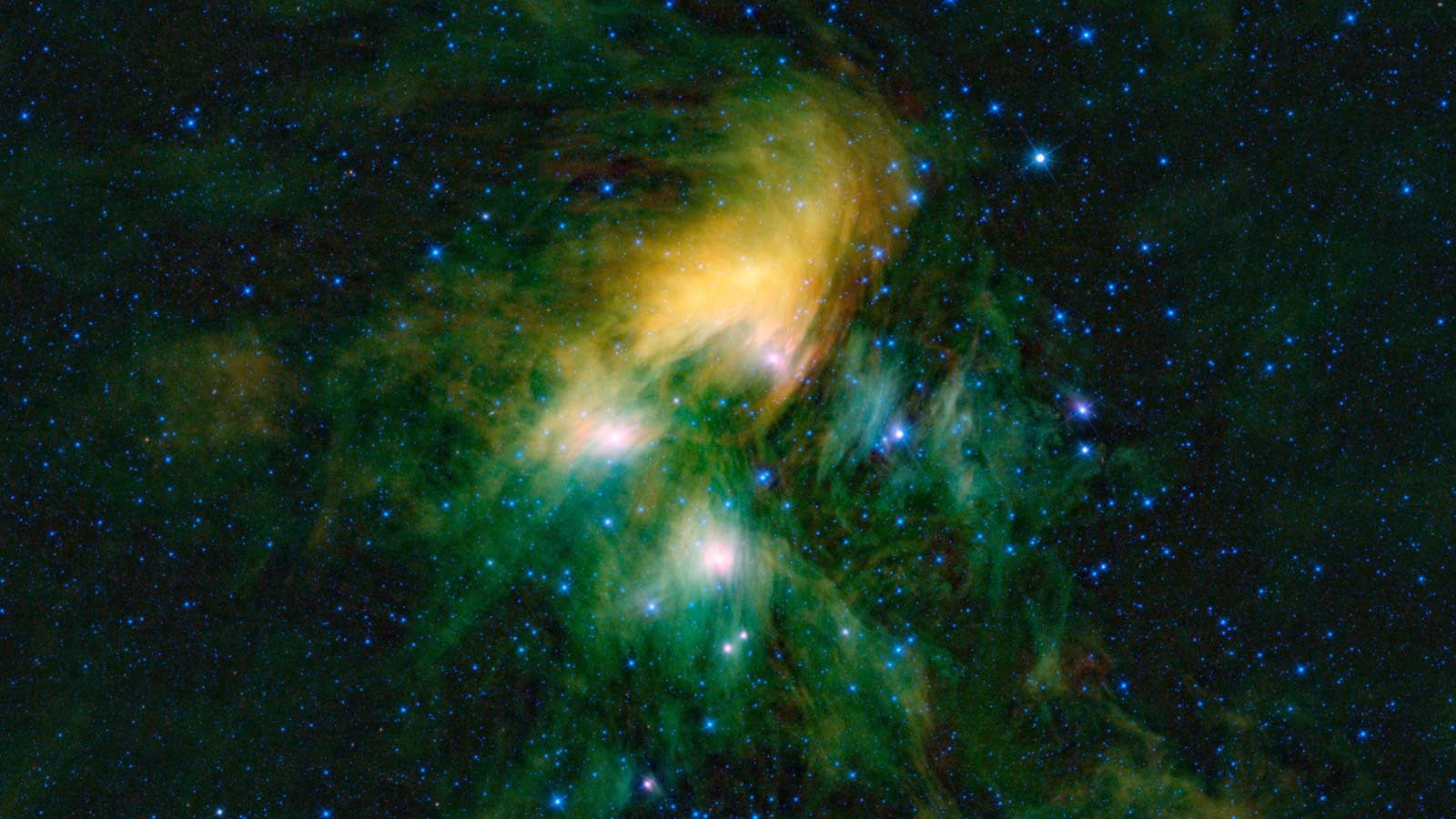