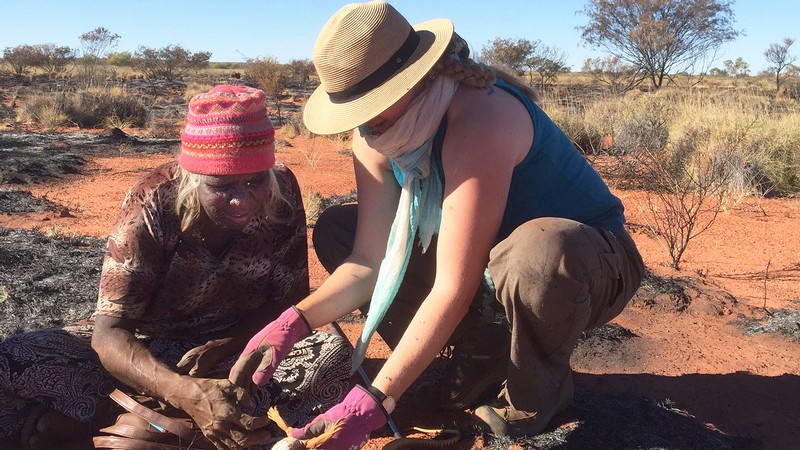 New research from Stefani Crabtree shows that modern subsistence diets, and the diets of ancient people, were much broader than what most people eat today. Crabtree (right) learned how to hunt goanna lizards and other aspects of subsistence eating from Nyalanka Taylor in Western Australia. Photo courtesy Stefani Crabtree. 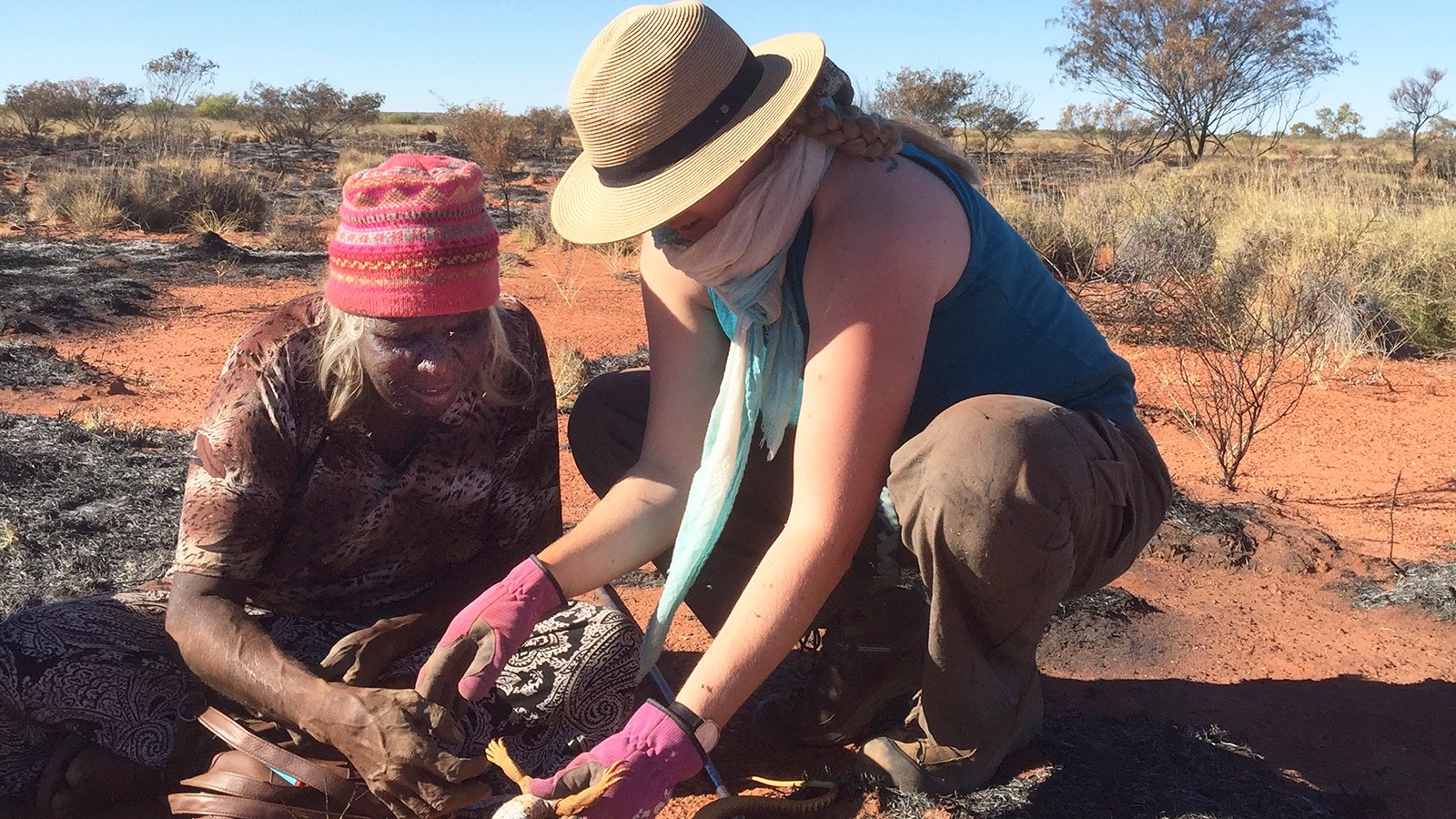 If there is any skill that humans are especially good at, it’s eating. From bleu cheese to hot chilies to smoked locusts, human digestive systems are remarkably adept at extracting nutrition from a variety of sources. But the modern diet doesn’t cover nearly the same ground as that of ancient humans, according to new research from Stefani Crabtree, assistant professor of social-environmental modeling in Utah State University’s Department of Environment and Society in the S.J. & Jessie E. Quinney College of Natural Resources.

Humans are considered ‘extreme opportunistic omnivores,’—but they aren’t as extreme as they once were, according to the research. Crabtree and her colleagues analyzed the molecular makeup of thousands of hair and fingernail samples from both ancient and modern humans to identify natural isotopes from digested food sources. Comparing these carbon and nitrogen isotopes allowed the researchers to model the dietary breadth of the different groups. They found a striking difference between ancient menus and those of today.

Ancient foragers and farmers weren’t picky eaters; from herring to bush onion to millet, the molecular markers of ancient diets reflected the consumption of a remarkably wide variety of foods. Today, by contrast, food sources are compressed into a few tight categories—sugar, corn, wheat and rice—as a direct consequence of food globalization. With irrigation and manufactured fertilizers, staples are now cultivated well outside of their natural range and shipped globally. Supermarkets that use these supply chains have the majority share of food retailing in wealthier countries. While there are still some regional differences between tropical and temperate countries, the modern menu has been reduced to around one-third of that observed across the ancient world.

This compression occurred, in part, as a result of better diets in developing countries. Also a contributing factor is that some animal and fish sources have been overexploited, leading to decreases in how and when they are eaten (think herring), and other foods have been taken off the table completely (grasshopper anyone?). But the largest contribution to the apparent decrease in food breadth is most likely today’s disconnect of most human populations from complex natural food webs.

There are consequences for the shift, said Crabtree. An increased reliance on industrial agriculture and livestock has created a cascade of ‘rewiring’ of today’s food webs. It makes the whole system less resilient when one of the few staples on which humans so heavily rely can become vulnerable to factors like climate change, she said.

There are still a few modern populations who can match the food breadth of our ancestors, Crabtree continued. Groups that still rely on subsistence eating (foraging and growing/eating their own food) showed a similar breadth to ancient diets—such as groups in the Amazon and Africa.

“But as habits shift, we must be aware of the consequences of these changes to the system as a whole, and understand how what we eat could become vulnerable to factors beyond our control,” Crabtree said. 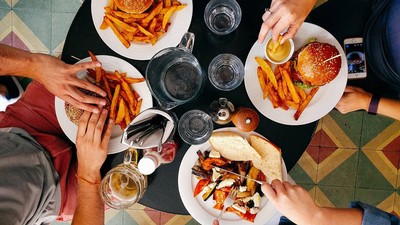 Humans are considered 'extreme opportunistic omnivores,' but they aren’t as extreme as they once were. New research notes a striking difference between the breadth of ancient menus and those of today. Stock photo courtesy PXFuel. 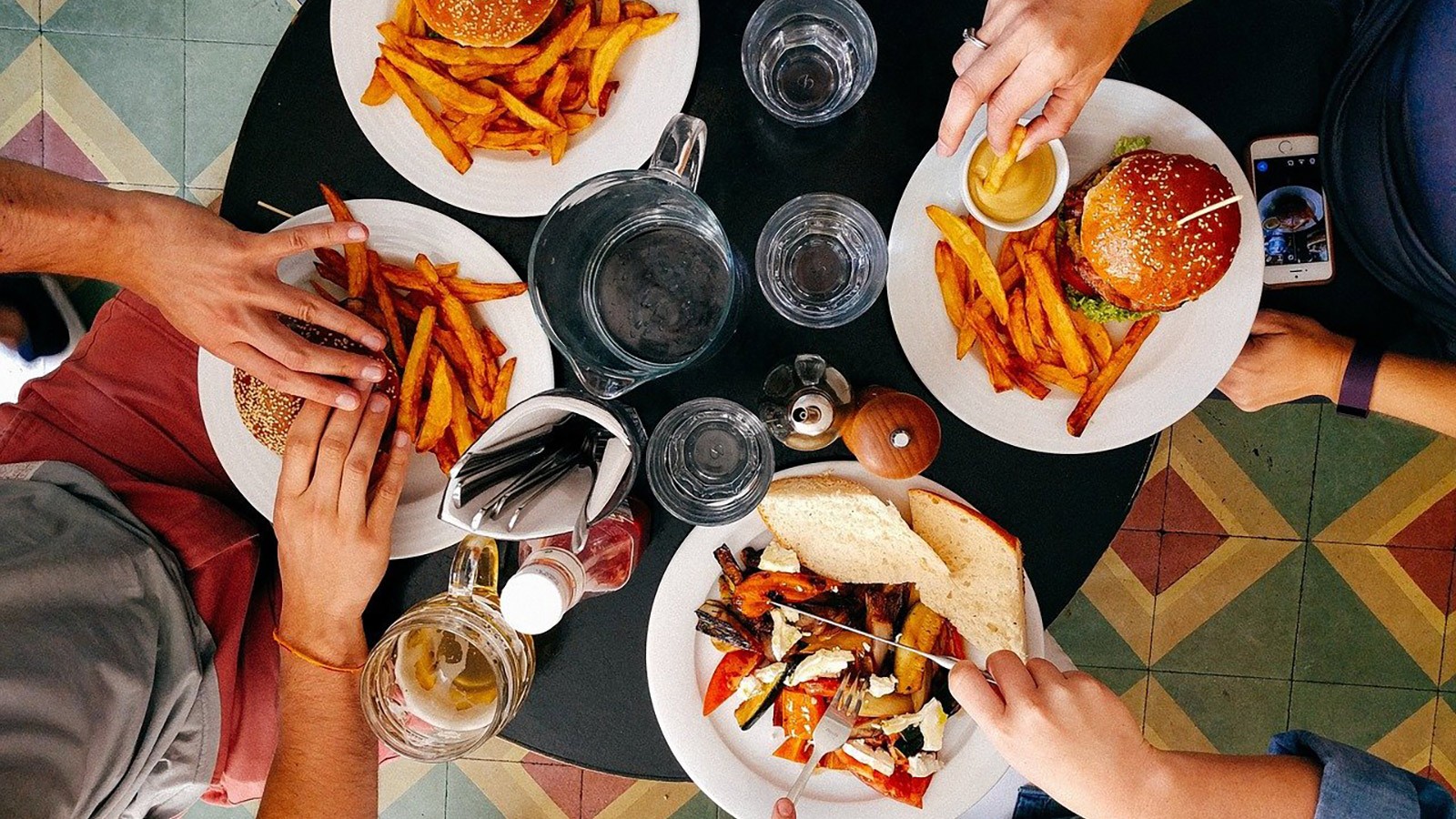