Utah State University students Taren McKenna and Cody Tramp were named 2009 Goldwater Scholars by the Barry M. Goldwater Scholarship and Excellence in Education Foundation. Aggie Brian “B.J.” Myers was awarded an honorable mention in the national competition.
The 2009 honorees, all students in USU’s College of Science, are members of USU’s Honors program and actively involved in undergraduate research projects. In addition to this year’s award recipients, Utah State boasts 11 Goldwater Scholars and four honorable mention recipients from previous years.
“The number of USU students who have been honored by the Goldwater Foundation through the years is not only a testimony of the quality of student who come to Utah State but also a reflection of the quality of instruction and mentoring our students receive from faculty members,” says College of Science Dean Mary Hubbard. “This is a wonderful honor for the students and the university.”
McKenna, a 2007 graduate of Utah’s Sky View High School, is a sophomore majoring in physics and mathematics. With faculty mentors Joe Koebbe and Farrell Edwards, she is exploring technical applications of small plasma systems.
McKenna received a USU Presidential Scholarship and a College of Science Research Mini-Grant and was among the first recipients of the Space Dynamics Laboratory Women in Science Scholarship. She was awarded the 2008 Math Department Outstanding First-Year Student Award and the 2008 O. Harry Otteson Award for Excellence in Introductory Physics. She plans to pursue graduate studies, conduct research in thermonuclear energy generation and teach at the university level.
McKenna and her older brother, Logan, who was named a Goldwater Scholar in 2006, are the first pair of siblings at USU to receive the prestigious award. Logan is currently a doctoral student at Washington University in St. Louis, Mo.
Wyoming native Tramp is a junior majoring in cellular and molecular biology and biochemistry. The USU Undergraduate Research Fellow is pursuing multiple research projects, including investigation of a lactic acid bacterium commonly used in the production of fermented dairy products.
A 2006 graduate of Lander Valley High School, Tramp received a Goldwater honorable mention in 2008. The same year, he was named a Utah Governor’s Scholar and a Koch Scholar. He is the recipient of a USU Presidential Scholarship, a College of Science Research Mini-Grant and a USU Undergraduate Research and Creative Opportunities Grant.
Tramp’s goals include earning a doctorate and pursuing research to investigate genetic and molecular cues triggering stem cell differentiation with the ultimate aim of creating organs or tissue for transplant recipients.
Bountiful, Utah, native Myers is a junior majoring in physics and computer science. With faculty mentor David Peak, Myers is conducting research on error correction using distributed computation in dynamical systems.
A 2006 graduate of Woods Cross High School, Myers entered USU as a National Merit Scholar and received a USU Presidential Scholarship. He is a Willard L. Eccles Undergraduate Fellow, a recipient of an Otteson Award and is a member of the Sigma Pi Sigma Physics Honor Society.
Myers plans to pursue graduate studies in physics.
USU’s 2009 honorees are among 278 award recipients selected from a field of 1,097 math, science and engineering students nominated by colleges and universities nationwide. The scholar award includes a two-year scholarship of up to $7,500 per year.
Previous Aggie honorees are Jodie Barker-Tvedtnes, physics, Tamara Jeppson, geology and physics, Sydney Chamberlin (Honorable Mention), physics and mathematics and Tramp (Honorable Mention) in 2008; Art Mahoney, computer science and mathematics, Jennifer Albretsen-Roth, physics and Barker-Tvedtnes (Honorable Mention) in 2007; McKenna, electrical engineering, Heidi Wheelwright, physics and Keith Warnick (Honorable Mention), physics, in 2006; Stephanie J. Chambers, biology and David Hatch, physics, in 2004; Jamie B. Jorgensen, physics, in 2002; Lara B. Anderson, physics, in 2001 and Jeff Jacobs, mechanical engineering, in 1998.
The Goldwater Scholar program was established by Congress in 1986 to foster academic excellence in science and mathematics in the nation’s universities.
Contact: Christie Fox, 435-797-3940, christie.fox@usu.edu
Writer: Mary-Ann Muffoletto, 435-797-3517; maryann.muffoletto@usu.edu 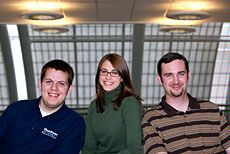