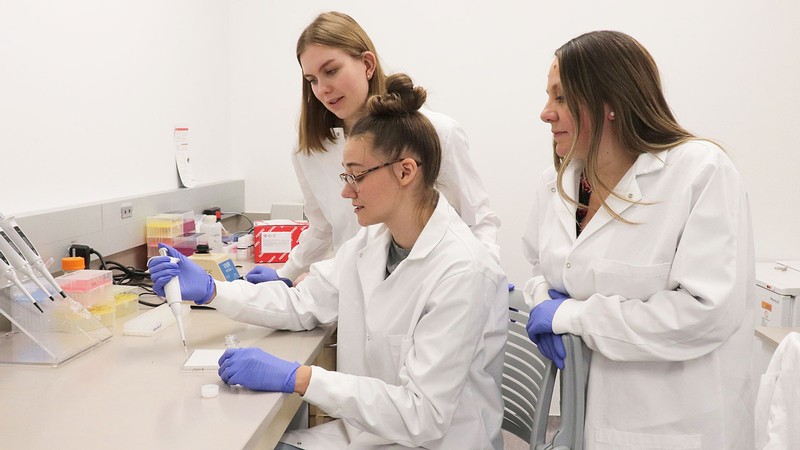 From left, scholars Emmaline Haderlie and Christen Ellis, with faculty mentor Erin Bobeck, study interactions in the brain, with a goal of exploring pain therapies to lessen the risk of opioid addiction. They present to Utah legislators Jan. 20. 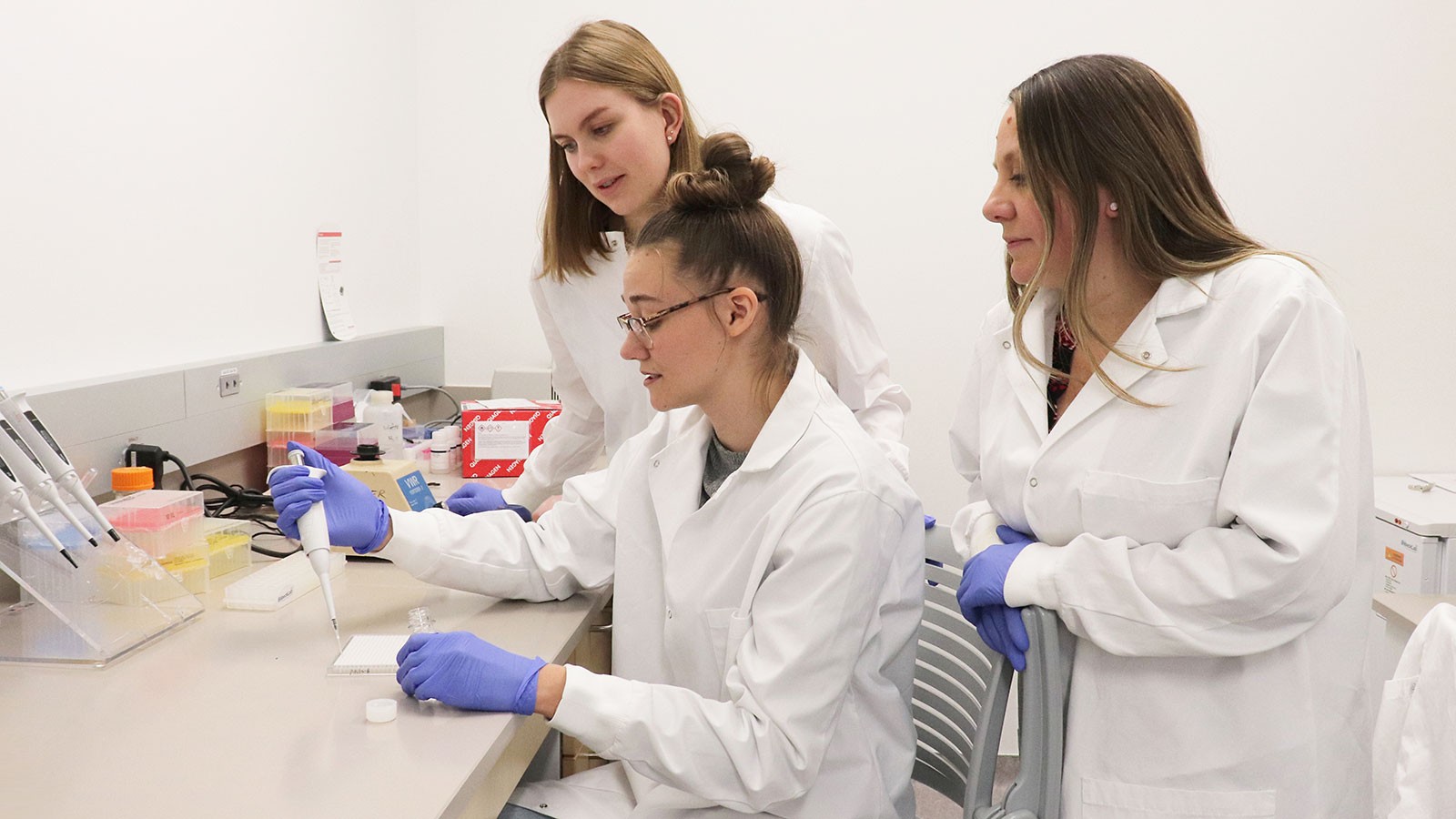 These deaths, she says, range from misuse of prescription drugs such as hydrocodone and oxycodone, to abuse of illegal drugs like heroin.

“Opioids have a high reward effect in the brain and are, therefore, highly addictive,” says Ellis’ student research partner, Emmaline Haderlie. “Widespread use of these drugs has fueled an opioid epidemic in the United States, including Utah.”

With faculty mentor Erin Bobeck, assistant professor in USU’s Department of Biology, Ellis and Haderlie are looking at the interaction between the brain’s opioid and cannabinoid receptor systems, with a goal of exploring possible alternate pain treatments to lessen the risk of dangerous addiction and promote prevention of overdose fatalities.

The two undergraduate researchers are among 26 Aggies who’ll present research posters to state legislators in Salt Lake City on Friday, Jan. 20, as part of 2023 Undergraduate Research Day on Utah’s Capitol Hill. The annual event, initiated in 2000, brings scholars from Utah State and the University of Utah to the hub of legislative activity to highlight the importance of university research to the welfare of local communities and in preparing Utah scholars to tackle future challenges.

“Cannabinoids are chemicals with effects similar to those found from substances derived from the cannabis plant,” says Ellis, a human biology major, who secured a USU Undergraduate Research and Creative Opportunities (URCO) grant to fund the team’s research. “These chemicals are naturally made in the brain and can also be found in external sources, such as the cannabis plant. THC, the active cannabinoid in marijuana, is probably among the most well-known of these chemicals.”

Ellis, Haderlie and Bobeck think combining a cannabinoid with an opioid might mitigate the addictive effects of the latter, while still providing effective pain relief. But study of cannabinoids faces stiff obstacles.

“The U.S. government classifies THC and many other cannabinoids as Schedule I drugs, meaning the substances have no currently accepted medical use, are clinically irrelevant and have a high potential for abuse,” Ellis says. “It would be very difficult and costly to gain permission to study these drugs.”

The USU researchers say the classification is unfortunate, because it stymies research that could offer a possible solution to a devastating societal problem. They note these drugs have demonstrated effectiveness in treating a variety of ailments, including epilepsy, anxiety and pain.

“There’s a stigma against cannabinoids, and, as with the introduction of any new drug therapy, there’s skepticism from the public,” Ellis says.

But the barrier hasn’t dampened the USU student’s enthusiasm for further study or prevented her from benefitting from participation in scientific research.

“Being part of a research project has been 100 percent beneficial for me,” says Ellis, who plans to pursue graduate studies in occupational therapy. “I’ve learned to be more independent, to take myself through the scientific process and to not fear failure. With research, you might make 12 plans and none of them work, but you continue to troubleshoot and find a path forward. This process has helped me gain a lot of confidence.”

“The biggest thing you learn in research is that you have to become a problem-solver,” she says. “There are no immediate answers.”

Working in a lab, Haderlie says, bridges the gap between classroom learning and actual research methods.

“When I see how concepts are applied in the lab, I understand the importance of establishing a solid academic foundation,” she says. “That helps me pay attention in class, knowing I’ll need the information I’m hearing in a lecture to understand and apply to the research.” 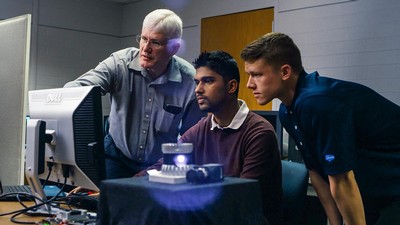 Romantic relationships aren't just matters of the heart, it turns out. It's really a matter of the brain.