According to the National Highway Traffic Safety Administration, about 200 Americans die in animal-vehicle accidents each year. In a recent study, the Centers for Disease Control found that one quarter of all animal-vehicle collisions result in human injury.

The animals fare even worse. Mangled carcasses of deer and other wildlife are an all-too-frequent sight along the nation’s highways. Yet keeping track of these mishaps over miles and miles of road is a challenge for transportation and wildlife agencies. To tackle this chore, Utah State University researchers employed smartphone technology to develop an efficient data collection system.

“We call it ‘Wildlife Vehicle Collision Reporter,’” says recent USU graduate and Quinney Fellow Daniel D. Olson, who led development of the application with USU colleagues, the Utah Department of Transportation, the state of Utah’s Automated Geographic Reference Center and the Utah Division of Wildlife Resources.

Development of the app was funded primarily by UDOT.

“Before the development of our app, individuals from many different agencies were recording collisions on paper,” says Olson, who completed his doctorate in wildlife biology at USU in 2013. “This was inefficient and led to a lot of errors.”

During its first year of use, Olson, state employees and contractors in Utah mapped 6,822 animal carcasses with an accuracy of about 15 feet.  (Previous recording methods relied on highway mile markers and could be off by more than 2,000 feet.) The new smartphone reporting system, which allows users to upload data directly from a phone to a computer, also took half the time as the old system.

“Having access to accurate data helps transportation planners determine where to construct fences and wildlife crossings where they’ll do the most good,” Olson says. “The data also provides wildlife managers with information about wildlife populations and migrations trends.”

Olson, who is starting a new position with the Oregon Department of Forestry, hopes the app will catch on in other states.

“It’s a seamless method for collecting and managing data,” he says. “The app increased efficiency and accuracy and provides agencies with valuable data on managing a hazard motorists are all too familiar with.” 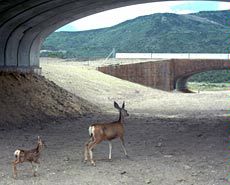 In an image captured by remote camera, a doe and fawn use a wildlife crossing in Utah to safely avoid a busy highway. USU researchers have developed a new smartphone app to keep track of wildlife-vehicle collisions. Courtesy of Patricia Cramer. 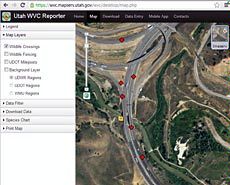