Adrie Roberts, who began her career with USU Extension on April 16, 1990, in the Beaver County office, says that her nomination for this year's E.G. Peterson Extension Award came via six former interns who worked under her before going onto to become full-time USU Extension agents in other counties around the state.

As the mother of three daughters who have all graduated from Utah State University, Adrie Roberts already had plenty of reasons to be proud of the three most-important women in her life.
But thanks to her mentorship of an additional posterity of a half-dozen other women, the longtime USU Extension agent was recently honored with the 2020 E.G. Peterson Extension Award.

“The E.G. Peterson Award is the ultimate award in Extension, and I have gone to a lot of USU graduations for my kids and in-laws, and when that person from Extension would march in with the rest of the leaders from the university, I would think, That is so cool,” says Roberts, an associate professor of family and consumer sciences, who recently retired after three decades with Utah State University.

“But I never, never imagined that I would get this award. Never,” adds Roberts, who had served as the director of the Cache County Extension office since 2005. “So, when I found out about it, I couldn’t’ have been more happy, but also I couldn’t have been more shocked. It’s really exciting to be recognized for the 30 years that I’ve put in, and the accomplishments.”

Roberts, who began her career with USU Extension on April 16, 1990, in the Beaver County office, says that her nomination for this year’s E.G. Peterson Extension Award came via six former interns who worked under her before going onto to become full-time USU Extension agents in other counties around the state.

“They nominated me and pushed the award through, which is just the icing on the cake for the whole thing,” Roberts says of the annual honor, which was established to honor “the Utah State University Extension professional who, in keeping with the mission and goals of Utah State University, has provided outstanding service to the state of Utah.”

A native of Ogden, Roberts graduated from Utah State University in 1980 with a bachelor’s degree in home economics. She then took a position as a high school teacher in Beaver, where she met and married a local dairy farmer. But in order to help supplement her family’s income, Roberts decided to complete a master’s degree, and in 1989, she moved back to Cache Valley. She and her three children lived in Aggie Village, while Roberts started work on her master’s degree in human environments and returned to her former student job as a waitress at a local restaurant.

After a year, Roberts and her children went back to west-central Utah, where she was hired as the home economist in USU Extension’s Beaver County office, with the stipulation that she would complete her master’s degree within six years.

“I’m just an Aggie through-and-through,” Roberts says. “And I absolutely loved going to college here. I love USU. And so to be able to live in Beaver County, Utah, and be able to work for my alma mater was a big deal. They were requiring a master’s degree when they first started advertising it, so I bundled up my kids and moved to Logan. … And after a year, I was able to complete the master’s degree through the distance ed programs which they had going.”

While in Beaver, Roberts taught all of the Extension office’s family-related courses, including parenting, marriage, family finance and food safety and preservation, while also working with the local youth in the 4-H program. But as she much as she enjoyed her position in Beaver, she couldn’t resist an opportunity to come back to Cache Valley once again and work “right in the backyard of Utah State University.”

Roberts was hired as the family and consumer sciences Extension agent after longtime agent Jean Alder retired in 2001, and she says she has evolved as an educator over the past 19 years in Logan, particularly in relation to the local Hispanic community.

“It’s been really rewarding, especially working with the Latino community,” Roberts continues. “Their culture is a much more loving and family-oriented culture than the average community in Cache County, and so it was great to be welcomed with that group and feel so appreciated by offering classes that they are not normally able to take simply because of the language barrier.”

Roberts says the Cache County office continued to evolve this past spring with helping get out information onset of the COVID-19 pandemic, and that she really came to realize how many people rely on the local USU Extension office when they had to close down during the quarantine period. The Extension facility in the Cache County Administration Building has since reopened, and Roberts says “we have a very busy office.”

“We are just constantly trying to be on the cutting edge of whatever the needs in the community are going to be, and I can see because of the impact of COVID, family finance is going to be huge,” Roberts points out. “… That’s probably the most impressive thing to me is that we’re always on the lookout for needs, and what needs to be done to make sure people are doing things correctly and safely and helping to improve the quality of their life.”

Being able to cap off her long career with Utah State University with the E.G. Peterson Extension Award clearly means a lot to Roberts, who says she’s felt very fortunate to work in “a great office … with people-friendly people who enjoy coming to work.”

“I wouldn’t change a thing; it’s been a great ride,” Roberts declares. “The pride that we all have for USU is deep. It’s in our hearts. We love USU, and we appreciate all that it’s done for us and the opportunities it’s afforded us.”

Today, the Year of the Woman highlights the incredible women who have participated in USU's Business programs. 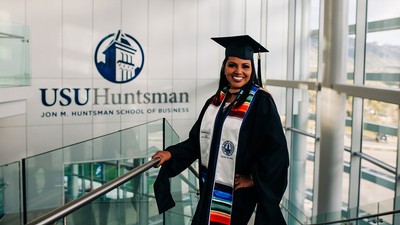