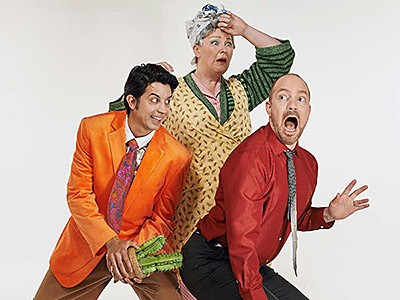 The Lyric Repertory Company, part of the Caine College of the Arts at Utah State University, opens its season with Noises Off June 11 at the Caine Lyric Theatre in downtown Logan.

Written by Tony Award-winning Michael Frayn, Noises Off came to be when Frayn was watching a performance of a different play he wrote from backstage.

Each of the three acts of Noises Off contains a performance of Nothing’s On, the play-within-a-play.

Act One is set at the dress rehearsal for Nothing’s On. The audience sees a hopelessly underprepared cast, baffled by entrances and exits, missed cues, missed lines and bothersome props, including a plate of sardines.

Act Two shows a matinee performance one month later, seen from backstage. The cast is now dealing with deteriorating relationships that lead to offstage shenanigans and onstage bedlam. On- and off-stage plots intertwine until they can no longer be kept separate.

During Act Three, the cast entirely abandons the plot and the characters ad-lib toward any sort of ending.

Directed by Jim Christian and the kick-off production to the Lyric Rep’s 2015 season, Noises Off is a hilarious farce taking its title from the theatrical stage direction indicating sounds coming from offstage. Between the traditional farce and backstage drama, ‘Noises’ keeps audience members on their toes, the director said.

“It is one of the wildest, most fast-paced, farcical comedies out there” Christian said. “It goes at breakneck speed and the show reinvents itself three times. It’s a huge puzzle that is delightful for the audience to watch come together.”

Christian says the show reminds him of the board game Mouse Trap because of the little pieces coming together each have their own effect.

“Directing the play-within-the-play is very challenging,” Christian said. “It’s definitely one of the hardest scripts I’ve ever worked on. The backstage action while ‘Nothing’s On’ is going on is really tricky. There are two simultaneous plays that have to interact with each other and have perfect timing.”

The play-within-the-play is set in the late 1960s, while Noises Off is contemporary, so the cast will have to transition between the two, Christian said.

“Our cast is absolutely outstanding, said Christian. “We have a stage full of people with great comedic timing and a really good sense of ensemble.”

Opening the weekend of June 11, Noises Off runs on selected dates through July 30. Audiences are reminded to note a change in the time of all matinee performances this season (check the calendar). Matinees will begin at 1 p.m.

Also part of the Lyric Rep 2015 season are Last Train to Nibroc, The Mystery of Edwin Drood and And Then There Were None.

For more information and tickets, visit the CCA Box Office located in room L-101 of the Chase Fine Arts Center, call 435-797-8022 or see the company’s website.