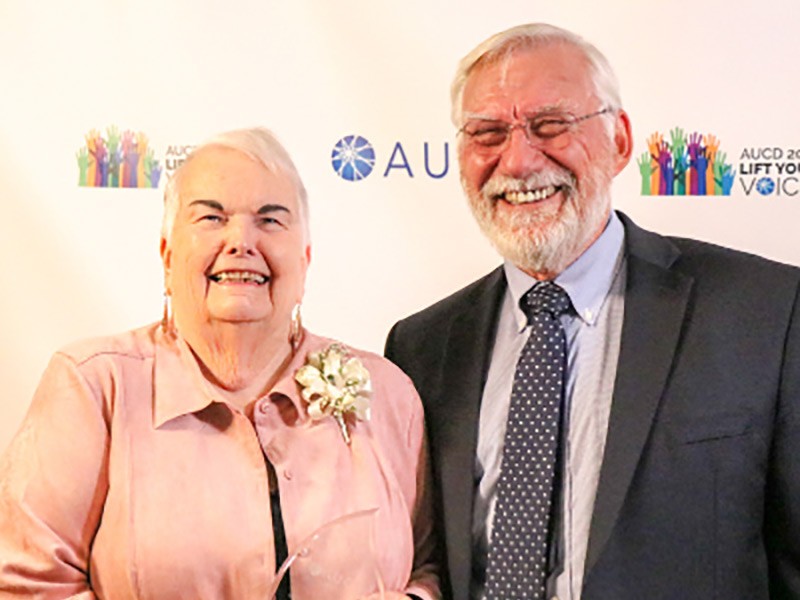 Judith Holt and George Jesien at the Association of University Centers on Disability conference in Washington, D.C.

In a room packed with colleagues, advocates and family members at the Association of University Centers on Disabilities (AUCD) Honors Celebration in Washington, D.C., Judith Holt was presented the George S. Jesien Distinguished Achievement Award November 7. The award recognizes “a distinguished career of excellence and leadership in support of AUCD’s mission to advance policy and practice for and with people living with developmental and other disabilities, their families and communities.”

AUCD is a national organization. Holt is a longtime leader at Utah State University’s Center for Persons with Disabilities, which is a member of the AUCD network.

“Judith Holt is a quiet leader whose full impact can only be seen by the tracks she has left throughout many states in this country, and the brilliant manner in which she has pulled together partners…. She has championed unserved, underserved, cultural and ethnically different groups, promoted students and created change for untold numbers of individuals,” Jesien said.

A prolific grant writer, she has generated more than $30 million in funding during her years at Utah State University.

“Much of the growth and success of the USU CPD can be directly attributed to Judith’s tireless mind and her uncanny ability to write winning proposals and build sustainable model programs,” said CPD Director Matthew Wappett. “Over her career, Judith has also taken a lead role in shaping the direction of interdisciplinary training … and has established herself as a quiet leader in the field. Dr. Holt strives for excellence in everything that she does, and does it with very little recognition or fanfare. She has made a remarkable difference in the lives of thousands of people in Utah and across the nation.”

Holt’s career in the AUCD network spans decades, including time as the associate director at the University of Arkansas, 15 years as the director of Interdisciplinary Training at the CPD and a recent two-year stint as CPD interim executive director. She is also an associate professor in the Department of Special Education and Rehabilitation at USU and is an adjunct professor in the Department of Pediatrics at the University of Utah Medical School Health Sciences Center.

Jesien also cited Holt’s leadership in the Utah Regional Leadership Education in Neurodevelopmental and Related Disabilities (URLEND) program, which she helped establish in 2001 as a model multi-state collaborative. URLEND provides interdisciplinary training for practitioners and future professionals who work with children with special health care needs across the rural West. The program uses a variety of training modalities and distance education tools to reach people who would not otherwise have access to this training experience, which helps them move beyond the boundaries of their discipline to provide optimal care. For the past decade, Holt has served as the co-director of the URLEND program.

“Judith originally had a background in early childhood, but her introduction to the UAP [currently UCEDD] system in the early ‘90’s forced her to take on a more flexible attitude,” Wappett wrote in his nomination of Holt. “One of Judith’s initial assignments at the University of Arkansas was to support the very active independent living movement in the state. Judith’s first project was to work with Richard Petty and Mainstream, an advocacy-oriented center for independent living in Little Rock, to orchestrate a protest of then Governor Bill Clinton’s proposed cuts to Medicaid in the state of Arkansas. She helped activists occupy Governor Clinton’s office and chain themselves to his desk. Judith was the go-between, and surreptitiously sneaked in food and water for the activists in her kids’ school backpacks for the duration of the protest. This experience became the jumping off point for Judith’s enduring commitment to the independent living movement.”

Referencing a quotation from Ralph Nader as the perfect description of Holt’s work, Jesien closed his remarks, “‘The first function of leadership is to produce more leaders and not just followers.’ Judith Holt has, and I hope will continue to leave a trail of new leaders everywhere she sets foot.”

During Holt’s acceptance speech, she took the opportunity to emphasize the importance of full inclusion. “I think the most remarkable thing I’ve learned in this network is how important the word ‘all’ is. All means all people, all ages, all races and ethnicities. It doesn’t just mean a select few…we are partners with all of the folks who are looking for the same kind of things in our lives, in community participation, and in happiness.”

Utah State University Assistant Professor Mateja R. Savoie-Roskos and a research team in the Department of Nutrition, Dietetics and Food Sciences (NDFS) have been honored with the 2020 Best Great Educational Material (GEM) award. 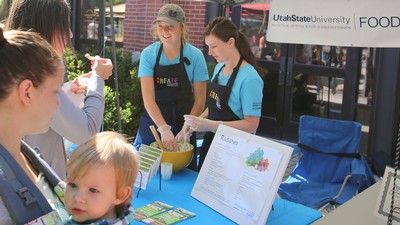