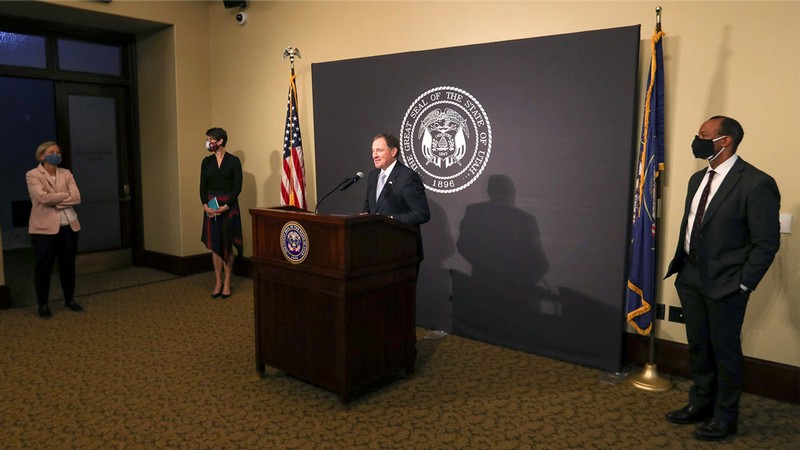 Utah Gov. Gary Herbert listens to a question from the media during a COVID-19 briefing announcing Utah Leads Together 3.0 on May 20 in Salt Lake City. (Photo courtesy of Steve Griffin/Deseret News) . 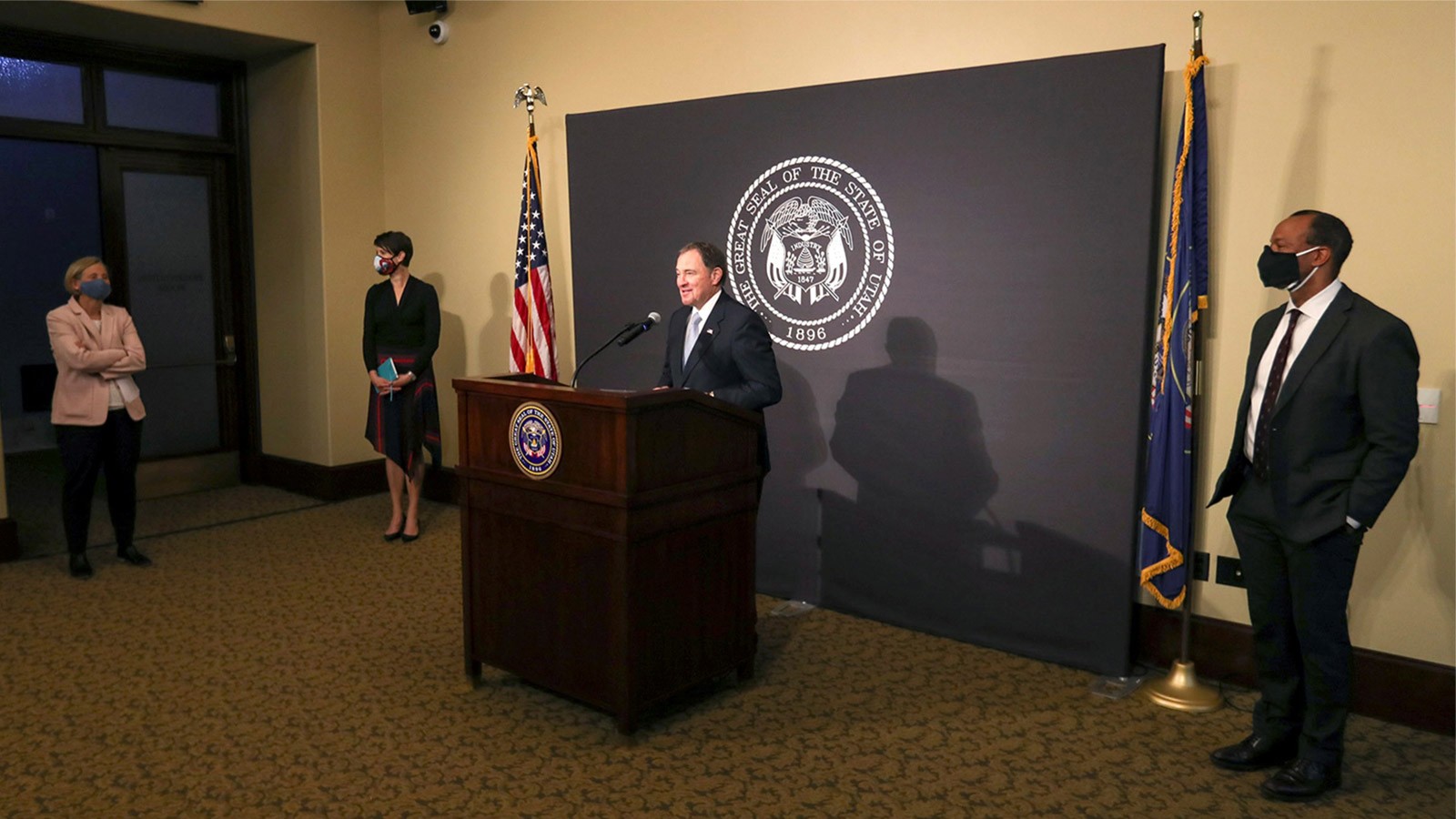 Just over a month after the COVID-19 pandemic forced the sudden shutdown of the Utah State University campus in mid-March, a pair of USU alums found themselves in a unique position with their alma mater. No longer the ones being taught, Andrew Croshaw and Bo Nemelka tried to educate the administration at Utah State about how to best deal with the extensive challenges presented by the worldwide coronavirus pandemic.

As prominent members of Leavitt Partners, a health care intelligence business created under the leadership of former Utah Governor Michael Leavitt, Croshaw and Nemelka were able to share a great deal of information and expertise during a presentation on April 15 to President Noelle Cockett and other campus leaders about how to best manage the current and future impact of COVID-19.

“Andrew and I are always happy to help Utah State,” said Nemelka, a 2011 graduate of the Jon M. Hunstman School of Business.

But as associates at Leavitt Partners, Nemelka and Croshaw’s reach has extended far beyond just Utah State the past couple of months. Founded by former Governor Leavitt in 2009, the Salt Lake City-based firm has been providing invaluable data and feedback for current Utah Governor Gary Herbert and other policy and decision makers throughout the state, as well as for a variety of other political and health care entities around the country.

“Being a former governor, Governor Leavitt certainly knows something about how to effectively manage large-scale things,” Nemelka noted. “Then he went the EPA and got very immersed into how our country deals with impacts on the environment. And then he was tapped to go to Health and Human Services, where he really did a deep dive into all things health and health care.”

Elected to three terms, Leavitt served as governor of Utah from January 1993 to November 2003, when he stepped down at the request of President George W. Bush, who installed Leavitt as the administrator of the Environmental Protection Agency. Leavitt served in that position for just over a year before Bush added him to his cabinet as the Secretary of Health and Human Services.

During his four years as HHS secretary, Leavitt worked closely with Dr. Anthony Fauci, longtime director of the National Institute of Allergy and Infectious Diseases, on a plan for the country about how to deal with a serious virus outbreak similar to what we’re experiencing now. And the H1NI pandemic of 2009 was just starting to emerge as he left his cabinet post with the change from the Bush Administration to the Obama Administration.

“One of the most interesting things about being a part of this right now is that Governor Leavitt was that he helped write the national pandemic response plan, and so that uniquely qualifies him to speak to how our country responses to a pandemic,” Nemelka said. “So, he has been very influential to the clients we serve, as well as to the general public in that voice. And he’s been excited about that, but he’s also pretty humbled by it because he knows how important this is.”

Croshaw, who joined Leavitt Partners at the time of its founding, has served as CEO of the firm since April 2017. A 1998 graduate of the Jon M. Huntsman School of Business, Croshaw was the student body president at USU before going on to complete an MBA at Harvard University in 2002 and later serve as a senior executive advisor to Leavitt at the U.S. Department of Health and Human Services.

Nemelka was a member of the Aggie men’s tennis team before graduating from USU with a degree in marketing and business, and he went onto to be elected the student body president at the Yale School of Public Health while completing a master’s of public health and health management. The twin brother of Blake Nemelka, the assistant director of the Huntsman Scholar program and director of undergraduate recruiting for the Huntsman School of Business, Bo has been a principal with Leavitt Partners for the last seven years.

Since the emergence of COVID-19 in the United States late last winter, Leavitt and his firm has monitored the spread of the virus, while developing ideas about how to limit its impact to both health and the economy.

“I think the most interesting thing to me about this has been the debate around, do you prioritize health or do you prioritize the economy?” Nemelka said. “And our stance has been: You can’t do one without the other. It’s not a light switch-like approach; it’s more of a dimmer approach, which is why you see some of our strategies being around red, yellow, orange and green.

“And nobody has the perfect formula of what does it take to go from red to orange or orange to yellow,” Nemelka added. “But as pressure mounts on the economy, you begin to feel the need to move the dimmer. And if you were just to switch it all the way to green, you could have a pretty dramatic impact that could cause you to regret doing that.”

Working in collaboration with Utah’s COVID-19 Community Task Force, the Leavitt Partners helped formulate the Utah Leads Together plan for health and economic recovery in the state. The first version of the plan was presented by Governor Herbert on March 24, while Version 2.0 followed on April 17 and Version 3.0 on May 20. Available online at https://coronavirus.utah.gov/utah-leads-together/, the latest plan provides additional guidance for residents of the state as Utah continues to re-open its economy under the yellow – or low-risk – category.

A statement near the beginning of Utah Leads Together 3.0 reads: “Utah leaders remain confident that as the COVID-19 pandemic ends, Utah will emerge even stronger. This plan provides clarity, confidence, and context for that recovery. Versions 1 and 2 of the Utah Leads Together plan presented economic phases, color-coded health guidance, and valuable data tools to help in Utah’s health and economic recovery. This version of the Utah Leads Together plan presents critical instructions for high risk populations, addresses impacts to Utah’s multi-cultural community, and plants seeds for Utah’s ultimate recovery.”

Shortly after the first Utah Leads Together plan was presented, several other states inquired about the process, and some have since adopted similar plans for re-opening their states.

“Utah has been getting some national recognition for its response to COVID-19,” Nemelka said. “We certainly have a smaller populations than some states, so maybe things are a bit more manageable than states with major metropolitan areas. But even then, Utah’s ability to come together quickly and make decisions effectively and collaboratively has been a highlight. In some of those states that have reached out, you can tell that they haven’t able to reach that level of collaboration as quickly as Utah has.”

In addition to state governments and large hospitals and health care providers around the nation, Leavitt Partners has also been advising individual colleges and universities, as well as the Utah System of Higher Education on how to go about safely reopening campuses in the fall. During a virtual meeting with USHE and Utah Board of Regents on May 15, Croshaw outlined many of the things that would need to happen at campuses around the state in order to keep students, staff and faculty healthy.

“It’s hard to predict what things will look like in August and September,” Croshaw said. “It really depends on the behavior of people in the state.

“But first, I’ll just say that the most important thing that we can be doing is to appropriately social distance and take precautionary measures with masks,” Croshaw added. “It will be a long time before we either have herd immunity or a vaccine.”

After a couple of bleak months, Nemelka said there is certainly reason for optimism that colleges and schools in the state will be able to safely re-open this fall, while businesses should finally be able to begin the long road to economic recovery. But as the Utah Leads Together plan states, it’s a step-by-step process as the state slowly turns the dial from a red (high-risk) situation towards orange (moderate), yellow (low) and green (new normal) status.

“The message that Governor Leavitt and others have been sharing is that pandemics do come to an end,” Nemelka noted. “But if you look at the history of pandemics and what experts say, they tend to have waves. So, you could consider this the first wave, and we have every reason to believe there could be a second wave – maybe even worse than what we’re experiencing now – like other pandemics have done.

“We’re not sure that will happen, but we should be ready for that,” Nemelka continued. “And vaccines and treatments take time, mostly for the supply chain and the production cycle to get into the right hands. So, I think there’s reason for a lot of optimism and promise, but 2020 will be a year where we’re all dealing with this in pretty significant ways.

“This will end, but you have to have a realistic perspective that we’re all in this not just for weeks and months, but for longer than that.”

For some, the holidays can also bring loneliness. Consider these tips. 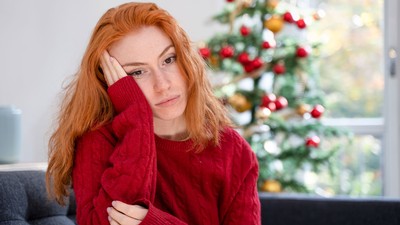