Utah State University engineering researchers Marvin Halling, Paul Barr and Kevin Womack received $5 million as part of a national study on bridge safety. The funding is provided by the U.S. Federal Highway Administration Office of Infrastructure, Research and Development as part of its Long-Term Bridge Performance Program.
USU was asked to work as sub-contractor by Rutgers University, the lead institution on the research project. Rutgers received $25 million to begin the project and will give $5 million to USU over five years to study the monitoring and inspection frequency of bridges located in the Western United States. In addition, the state of Utah and the Utah Transportation Center located at USU is providing $1.15 million to assist with the study of Utah bridges. The Virginia Transportation Research Council and Virginia Tech University will monitor bridges in the Eastern United States.
“The Minnesota bridge collapse in the late summer of 2007 made bridge safety a more important topic to the public,” Halling said. “But the public should know that the Federal Highway Administration had been looking into this issue long before that tragedy happened. Most bridges are designed to have a lifespan of 30 to 40 years, and the government and state highway offices are well aware that many bridges have outlived their lifespan.”
Halling said this is why the LTBP program came into being. The program will include detailed inspection, periodic evaluation and testing, continuous monitoring and forensic investigation of representative samples of bridges throughout the United States to capture and document their performance.
“In 2005 there were approximately 156,000 structurally deficient or functionally obsolete bridges in the United States,” said Hamid Ghasemi, LTBP program manager. “This number is likely to increase in coming years due, in large part, to increased traffic demand, continued bridge aging and deterioration and limited funds for rehabilitation and maintenance.”
The project is an ambitious 20-year research effort that is strategic in nature with specific short- and long-term goals. The researchers say the program will result in a high-quality, quantitative database that will have an impact on the value, success and efficiency of bridge management systems in the future.
“The Long-Term Bridge Performance Program is an aggressive approach by the federal government to address the need for a better long-term understanding of bridge behavior,” Barr said.  “The data that will be collected will provide state engineers the ability to not only determine potential collapse problems, but also provide the tools necessary to make maintenance decisions which will allow for a better allocation of already scarce tax dollars.”
With thousands of bridges in the United States, the task may seem daunting. But Halling said that a representative 20 to 100 bridges will be studied for the project.
“When people think of bridges, they think of signature, one-of-a-kind bridges, such as the Golden Gate Bridge,” Halling said. “This study is not looking at those bridges. We are going to look at the cookie cutter, typical overpass bridges commuters use daily.”
More drivers on the nation’s roadways means the United States needs improved maintenance and repair strategies in the future and such improvements will require high-quality quantitative data on which to base the development of new models. The data will provide a better understanding of bridge deterioration due to corrosion, fatigue, weather and loads and will help engineers to improve the operational performance of bridges with the potential of reducing congestion, delay and crashes.
“This study will help us do that,” Halling said. “If successful, the program will result in safer bridges that last longer and require less maintenance.”
Halling is the principal investigator on the project. Barr and Womack are co-investigators.
For more information on USU’s part in the Long-Term Bridge Performance Program, contact Marvin Halling, 435-797-3179, halling@cc.usu.edu. For more information on the entire program, visit the Web site. 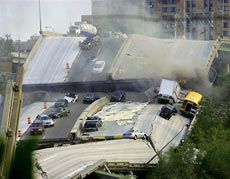 The Minnesota bridge collapse in the late summer of 2007 made bridge safety a more important topic to the public.