The Utah State University Extension 4-H San Juan Robotics Team won the Excellence Award at the regional VEX Robotics Tournament held Feb. 11 in Hyrum, Utah. The team is now qualified to attend the World Competition in Orlando, Fla., April 14 to16. The team brought home two out of seven trophies, competing against 17 teams from around the state.

“They announced our team as the winner of this award,” said Miriam Peterson, volunteer 4-H leader and coach from Monticello. “This qualified us to attend the World Competition in Orlando, Fla., April 14-16. Teams from China, New Zealand and all over the globe will be there. We are very excited to get to participate in a worldwide event.”

The award comes on the heels of President Obama’s recent budget support for science and education.

“We are pleased that President Obama recognizes the importance and impact science has on our society,” said Dave Francis, Utah State University Extension associate professor for 4-H youth development. “I have seen firsthand what these important science and technology programs can do for our youth. It is important that we invest in them since our young people are our future.”

According to Peterson, the game is played with four robots on the game board. Robots are paired in an alliance. One student uses a joystick to control the robot on the game board while another calls out commands for driving the robot. The robots must place plastic tubes on goal posts for points and must also climb a three-foot ladder, with points based on how high the robot climbs.

“Our robot was able to pick up five tubes at a time, quickly place all five on goal posts, climb the ladder and also push other robots around,” Peterson said.

After the matches were over, the judges worked on scoring each team in order to determine the winner of the Excellence Award.

According to the VEX robotics website, the Excellence Award is the highest award presented in the VEX Robotics Competition.

“The recipient of this award is a team that exemplifies overall excellence in building a well-rounded VEX robotics program,” it states. “This team excels in many areas and is a shining example of dedication, devotion, hard work and teamwork. Strong contenders in numerous award categories, these team members deserve to be recognized for their accomplishments in building a robot and in building a team committed to quality in everything they do.”

Francis echoed this, and said that 4-H just released a new robotics curriculum, and the work the San Juan team is doing is part of the larger, growing interest in 4-H robotics. Further information can be found online.

In preparation for the robotics competition, the San Juan team began designing and building their robot in May 2010.

“Team members purchased motors, screws and metal plates similar to an Erector Set and constructed the robot with their own design,” Peterson said. “They built their own game board and created a historical document logging the creative engineering process for the judges to review. Computer programming code was used to make the robot turn, lift and drop tubes, move as needed and make the joystick work. Our team members worked hard, and I am very proud of them. I think we have what it takes to win the world competition.”

Peterson said the team is now seeking funds to send the members to Florida.

“We will be teaching Lego Robotics classes to raise money,” she said. “We have a few laptops we use to host these Lego events, but we need more. It doesn’t matter whether or not the laptops are functioning because we know how to fix them.” 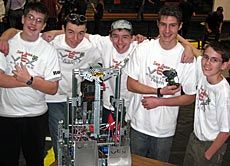