Utah State University Cooperative Extension is collaborating with state agencies to protect Utah’s agriculture and food. Strengthening Community Agrosecurity Planning (S-CAP) workshops were developed to provide two-day training for community planners and first responders so that food and agriculture are protected in the event of a natural, intentional or accidental disaster.
In collaboration with the Utah Department of Agriculture and Food (UDAF) and the Utah Division of Homeland Security (UDHS), USU Cooperative Extension plans to present the workshops to every county in the state over the next two years, and UDAF and UDHS will implement field exercises to test the county’s plans. Cache, Sevier, Uintah, Duchesne and Daggett counties have received the training, and workshops in San Juan County are planned for Aug. 24 and 25.
According to Kerry Rood, USU Cooperative Extension veterinarian and Utah S-CAP team leader, a 2008 state of Utah capability assessment and gap analysis study ranked Utah low in protecting food and agriculture.
“Such things as wildfires, oil spills, ice storms and earthquakes are included in community ‘All Hazards Emergency Response’ plans, but communities are often not prepared for an emergency in agriculture,” said Rood. “Because of this, we created the workshops hoping communities will incorporate the protection of agriculture into their plans.”
Workshops are part of an Extension Disaster Education Network (EDEN) proposal intended to include agricultural issues in local emergency plans. EDEN links Extension educators from across the United States and various disciplines, enabling them to use and share resources to reduce the impact of disasters. EDEN information is available online.
“Protecting Utah’s agriculture and food supply is paramount to the state’s security,” said Rood. “If a disaster happens, it affects the community, the psyche of the people and the economy. The economic impact of animal diseases or other agricultural disasters brings about losses due to emergency response, marketing restrictions or loss, decreased tourism, lowered public perception and decreased productivity or increased production costs. These losses can be devastating to a community.”
Many don’t realize that production and processing of agricultural products in Utah
accounted for 13.9 percent of Utah’s gross state product in 2008, he said.
As far as agrosecurity is concerned, we need to get it out to the grass roots level, said Bruce King, Utah State veterinarian. Agriculture is the economy for almost all rural areas of the state. In many cases, it is the only business. The manufacturing firms in these areas are the farms.
“It all starts at home and it all ends at home,” he said. “But the thing many don’t recognize is that in the event of a disaster, the federal government can write a check, but they aren’t going to be on the scene for quite a while. Enough time will pass and if we can’t get a handle on it, it will be out of control. It’s crucial for first responders to be trained and have agrosecurity as part of their emergency response plans.”
A webinar on agrosecurity was recently presented at USU and can be viewed from the Cooperative Extension website.
Writer: Julene Reese, 435-797-0810
Contact: Kerry Rood, 435-797-1882

National research has found that while women and men have both struggled to find and keep employment during the COVID-19 pandemic, women have been more negatively impacted than men. 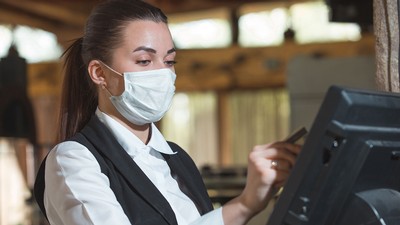 A native of Finland, Teppo Felin is a world-renowned professor of strategy at the Saïd Business School, University of Oxford, where he currently serves as the academic director of the Oxford Diploma in Strategy and Innovation.